Roy Keane remains entertaining, unrepentant and his own worst enemy 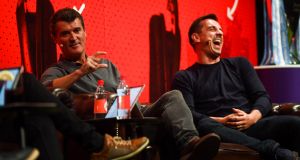 Roy Keane and Gary Neville at an event at the Bord Gáis Theatre in Dublin. Photo: David Fitzgerald/Sportsfile

The next Martin Scorcese film due to be released is called The Irishman. If the great, bushy-eyed director should ever stumble on Roy Keane’s live interview with the Off the Ball crew during the week, then he will go to his grave wishing he could have cast Cork’s perpetual tearaway in a starring role.

For it is becoming increasingly clear that as well as being the best footballer that Ireland has produced, Roy Keane will remain one its true contrarians. The chief contradiction is that the man who is always portrayed as seething and angry is a natural stand-up comedian, with a delivery and a knack for timing that must make most funny men and women shake their heads in despair. He never has to reach for laughs.

It’s a gift probably not a million times removed from his original public role in life as a central midfield authority through the peak of Alex Ferguson’s reign at United when his timing was everything: knowing precisely when to hold back, when to snarl, how much weight to put on those low, rolled passes, where to position himself and when to put the boot in. At a live show this week, he was in royal form along with Gary Neville, his former Manchester United team mate and a brilliant Dudley to Keane’s Peter, who sat interjecting with that high-pitch nervy laugh whenever Keane strayed into dangerous territory – which was almost all of the time. The live show was a coup for the Off the Ball crew and the hosts, Joe Molloy and Nathan Murphy, did a terrific job, albeit bearing the concerned expressions of two men treading water in a small swimming pool along with a shark whom they’d been assured was a fussy eater.

The live show had hardly finished when the social media stratosphere was radioactive with reports that Keane had grievously insulted the former Ireland international Jon Walters, by mocking him for a television interview in which Walters had spoken about his mother, who passed away when he was 11. Walters is one of the most popular players to ever play for Ireland, joining that band of ex-players who left more blood and sweat on the field that was strictly reasonable. He’s always come across as a decent sort.

That interview, on the Late Late Show, struck a chord with many viewers as Walters spoke powerfully and with evident pain about his mother and other personal tragedies. To any reasonable mind, it seemed callous that Keane should mock that. Outrage and condemnation quickly followed. On Friday, the Irish Hospice Foundation – in response to a query – advocated that people should be free to talk about their grief. (One imagines Keane catching the headline as he scrolled through his smart phone and rolling his eyes to heavens: further proof that the world has finally gone mad).

If you were only half-paying attention – if you were understandably distracted by the sights and sounds of Britain disintegrating – then the reports of the moment would have come across as unforgivably nasty. The moment was loaded with contradictions. For a start, here was Keane giving out about Walters doing the publicity circuit at a public event that would be broadcast on video and podcast. Futhermore, the interview was behind done as a charity event for Aware, the organisation there to help those with depression and bi-polar disorder.

But it’s important to set Keane’s remarks against the context of the show. Firstly, it was just that: a two-hour show, in front of a packed out Bord Gáis Energy Theatre crowd who were in beery mood and wanted to hear the latest goss. In his post-football life, Keane has developed an easy knack for trading on his reputation for toughness and edgy charisma by almost sending himself up. Everything is played for laughs but the kind of laughs that engage Keane – uneasy, sharp laughter and biting observation: the polar opposite to clubby, invidious bantz.

He clearly enjoys Neville’s company, who is spiky in his own right and who has, in his post-football life, revealed himself as the kind of incendiary gossip that keeps Liv and Tracey goggle-eyed down the Rover’s Return. The thing about Keane as a pundit is that he has no filter. If you ask him a question, the trouble is that he will answer it. So once the subject of Walters was raised – in connection with the reported blow-up he and Harry Arter got into with Keane in the Irish camp (“It’s a luv-ly staw-ry” chortled Neville), you were going to get the full unedited Keane. Everyone got a kicking: Walters, Arter, “Wardy” – the story came out through Stephen’s Ward leaked WhatsApp voice message to a friend. And it was delivered in Keane’s dry, sardonic wit.

If you listen closely, he actually praises Walters’ on-field performances – sparingly – and at one stage says this: “He promised to pay me a visit at my home a few years ago ... and I’m still waiting. And I gave him the address. Good old John!” In a famous Observer interview years ago with Sean O’Hagan, Keane made such repeated reference to Niall Quinn having visited his home that O’Hagan interrupted to ask him what the big deal about that was. Keane looked at him as though he was mad. “Nobody comes to my house,” he explained. If Walters was in the house-guest category, then Keane clearly thought something of him.

The reason Keane is so unsparing of Ferguson is that he the man was one of the most important figures in his life – and then he cast him aside in a manner that was far more brutal than anything Keane could ever say.

The words concerning Jon Walters that landed Keane in trouble were: “Talks a good game ... and then he does the circuit stuff, goes on the TV, how harshly he was treated by me, he’s crying on the tv, family situation ... as if he was the only one who ... do me a favour.” It was as if an image of Walters on television crossed Keane’s mind in the middle of his stream of consciousness and then he checked himself as he remembered the context.

But the damage was done.

Keane played his last game for Manchester United in 2005. Ferguson left the club in 2013. That period has long drifted into the realms of nostalgia and for any United fan under the age of 20, it must be mystifying to hear Keane still raging against the dying of the light in such vivid detail – “we were supposed to go for a Chinese. Do you remember?” – he says, prodding Neville about a pre-season camp spat during his last days, before getting stuck into Ferguson. In one way, it’s a hoot. In another way, it’s tragic.

And in part, that’s because there is always something tragic about a great sports figure grappling around to try and make sense of what they should be or can be once their magisterial moment has passed. Anyone who remembers Keane in his full athletic glory, when he was literally the most commanding figure in European football, cannot ever fully forgive him for not still being that. But he can’t be Roy Keane the footballer anymore and, as he admits, few club executives are willing to take a chance on giving him a crack on managing their first team, precisely because they are scared of what he might say. So he can only be himself: always entertaining, ever unrepentant and sometimes his own worst enemy.

1 The Offload: Ireland are stuck in no man’s land
2 Nicky English: Galway and Waterford face battles with fatigue in All-Ireland semis
3 Every kind of wind imaginable was against Tipperary football - and they came through
4 Former Ireland assistant manager Maurice Setters has died aged 83
5 Tipperary and Cavan deliver two earthquakes in one day
Real news has value SUBSCRIBE
Crossword Get access to over 6,000 interactive crosswords