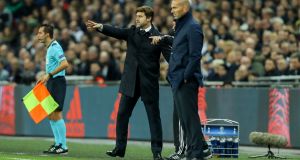 Real Madrid have identified Mauricio Pochettino as the principal candidate to take over as manager after Zinedine Zidane’s surprise decision to walk away from the club. Tottenham, however, are adamant the Argentinian’s new contract does not contain a clause that allows him to join the triple European champions.

Zidane announced he was leaving the Santiago Bernabéu on Thursday, five days after Real beat Liverpool 3-1 in the Champions League final in Kiev. It is understood the Real president, Florentino Pérez, has anointed Pochettino and has already sought to make contact with the 46-year-old after being caught off-guard by Zidane’s departure.

Real are aware Pochettino signed a five-year deal with Spurs six days ago and believe it contains a clause which allows him to leave. Tottenham insist that is not the case and have also denied the existence of any verbal agreement between the former Espanyol and Southampton manager and the Spurs chairman, Daniel Levy, over a potential departure to La Liga.

Pochettino’s contract is worth a reported £8m a year, making him the fourth-best paid manager in the Premier League. Before signing, he urged Levy to “be brave and take risks” and it is believed he has been given assurances Tottenham will have money to spend as they prepare to move into their renovated stadium next season.

But the lure of moving back to Spain, where he spent eight years as a player before cutting his managerial teeth with Espanyol between 2009-2012, may prove too strong to resist. – Guardian service