‘Suddenly we thought: ‘We’re going to die.’ It was a very hard moment. Totally scared’ 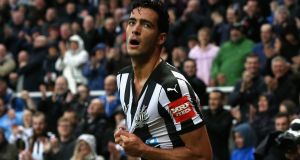 Mikel Merino had his headphones on and was listening to Spanish Reggaeton music as the bus swung on to a familiar main road. With the volume pushed to maximum, he felt safely cocooned in his own little world. Then the bombs went off.

“Everything changed – completely,” says Newcastle United’s £8.5m midfield signing from Borussia Dortmund. “Suddenly we thought: ‘We’re going to die.’ It was a very hard moment. We were totally scared.”

It was only on April 11th that Dortmund were being transported between their team hotel and the Westfalenstadion for a Champions League quarter-final first leg against Monaco.

Three homemade pipe bombs, hidden behind a hedge and packed with sharp metal pins, had just been detonated. Mercifully the bus’s reinforced windows saved Thomas Tuchel and his squad from catastrophic injury, with the only casualties being the Spanish defender Marc Bartra, who required surgery on his right wrist, and a police motorcycle outrider, who suffered hearing damage and acute shock.

A 28-year-old German-Russian dual national was eventually charged with 28 counts of attempted murder. It appears he was a stockmarket speculator hoping to profit from a dramatic plunge in Borussia Dormund’s share price in the event of the squad sustaining mass casualties.

As Merino sits in a quiet corner of Newcastle’s suburban training ground his recollections of that awful evening remain as vivid as his bright red baseball boots. “It was a really hard experience to live through,” he says. “It changes you.” The memories of team-mates throwing themselves on the floor and screaming at the driver to “get us out of here” as the bus lurched to one side while outside the soft spring air filled with dust, will never leave him.

“We didn’t know if there’d be more bombs or if a group with guns would come on the bus and kill us,” he says in impressively fluent English. “But now it’s in the past. I’m happy to be alive and to be enjoying playing football.”

That night has left Merino determined to view life differently. “Now I always try to look at experiences, even bad ones, with good eyes,” says this strikingly mature, poised young man from Pamplona. “After something like that happens you’re easier, more relaxed, about certain things that you used to worry about. You realise you have to think about the important things and enjoy every moment.”

Merino remains close to Bartra. “One of the bombs had exploded by him and he had really bad pain in his arm,” he recalls. “He was very white and didn’t know where he was so I tried to help. I was talking to his wife on the phone, telling her what was happening and where we were going. Then I went with him in the ambulance to hospital and stayed the night there. I could translate for him.

“I didn’t like to see him like that but, earlier in the season, when I was struggling at Dortmund and I felt under a lot of pressure inside, he had helped me a lot so it was good I could be his friend too. Fortunately he’s a strong guy with an incredible wife and he has no problems now. He’s fine but, like me, he’s learnt a lot of things about life. He also looks at everything with good eyes now. He’s grateful to be alive.”

I thought English people would be cold, dry and not kind but I was wrong and I’m happy about it

If trips on Newcastle’s team bus leave Merino unfazed, it was, initially, a little different back in Germany. “I remember the next time we went on the bus I was wary, there was a bit of disquiet,” he says. “Then, when we played the away leg against Monaco the bus was delayed in traffic for 30 minutes. We became tense and started asking what was going on.”

Considerably less tension surrounded a frustrating year spent under Tuchel following the Spain Under-21 player’s move from Osasuna. In all, Merino made only eight appearances for Dortmund’s then manager. “It depends on the confidence people have in you,” says a player who has not only started virtually every match for Rafael Benítez’s side this season but also seen his passing game likened to that of a fellow Basque, Xabi Alonso. “At Dortmund I didn’t have the confidence of the coach,” he says. “I’m the same player as last year but here the manager trusts me. That’s the main difference.”

There have been sufficient defence-splitting passes from his role deep in midfield – quite a contrast to the No10 berth he occupies for Spain Under-21s – to ensure Merino can rarely traverse Tyneside anonymously.

“In Dortmund no one recognised me but when I walk the streets here the fans show me their love,” he says. “I’m really happy with the people in Newcastle, they’re very kind, always trying to help you. I didn’t expect that. I thought English people would be cold, dry and not kind but I was wrong and I’m happy about it. I didn’t expect all the laughter and jokes you have here.”

Merino has found his new habitat similarly agreeable. “I live 15 minutes from the city centre and it’s so close to the countryside and the coast, I often go to the beaches here,” he adds. “There’s much more to do in Newcastle than in Dortmund. I feel at home here.”

There is also a greater chance of fulfilling his dream and graduating to Spain’s senior team. “It’s probably not ready to happen right now but I hope to be in the squad in the near future,” he says. “I think I can achieve that playing for Newcastle; why not? Growing up in Spain you’re expected to play tiki-taka and I like that type of football but I can do other things too. I want to be good with the ball but I’m tall and quite physical and I’m trying to be a complete midfielder.”

If Merino’s amalgam of vision – since Rob Lee’s days few in his position at St James’ Park have read the game better – and willingness to put a foot in when necessary is helping Benítez’s side retain possession better than last season, so too is his mind-set.

“In Spain you learn that football has to be played in the head; it’s not only running and physical things,” he says. “Spain has always had great central midfielders and, while of course they’re good technically, they’re also very good mentally. They know what to do and when, and they’re always thinking about the game and how they can help their team.”

The son of Ángel Merino, a former Las Palmas, Celta Vigo and Osasuna midfielder turned professional coach – and friendly acquaintance of Benítez – Merino grew up in a household where frequent in-depth tactical analysis of matches seemed as normal as Pamplona’s annual San Fermin festival, featuring the Encierro or Running of the Bulls.

Involving the release of six bulls with thousands of locals running alongside as the beasts charge through the city’s maze of tight streets, it is an incredible sight. “It’s dangerous but a normal thing in Pamplona,” Merino says. “It’s always happened there and will continue.”

An early sense that a Newcastle side promoted last spring could quickly find themselves in peril has evaporated as Benítez’s astute gameplans have frequently left his team looking greater than the sum of their parts. “We’re a young squad and the most important thing is that we all trust each other,” he adds. “I’m learning a lot from Rafa. I always had ability to read games but I’m understanding more now.

“He looks after the small tactical details and teaches you how every single little thing can be important. In training he’s very professional and expects you to be completely focused but off the pitch Rafa’s a really nice guy. He always takes care of you.”

After the events of April 11th Merino knows precisely how much that matters.