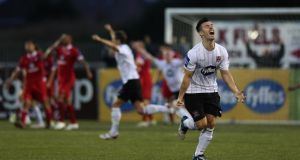 The scale of change at Oriel Park this season has been so dramatic it would be difficult to pick one player who epitomises all that has gone right. It’s pretty difficult to imagine, however, anyone’s shortlist not including Richie Towell.

The Dubliner has endured his share of setbacks over the last few years with a dream move from Crumlin to Celtic yielding just one first team appearance. A switch to Hibernian that initially went well under Colin Calderwood also ended in disappointment when it became apparent he simply didn’t figure in Pat Fenlon’s plans.

Towell’s talents were always likely to be rather more appreciated back at home, though, and after a spell ticking over with Bluebell he had options, several of which must have initially looked more enticing than Dundalk. “Once I talked to Stephen Kenny, ” he insists however, “there wasn’t really a choice to be made.”

Kenny seemed similarly enthusiastic about the Dubliner at the season’s start, insisting that he was someone who could make a big splash and it soon became apparent why.

From the earliest weeks of the campaign Towell stood out, primarily for the way he linked the team’s back four with its midfield and then nudged things forward but often too for the way he could transform the pace of the game, suddenly tearing past opponents with the ball at his feet or releasing team -mates with perfectly placed passes to the wings or into the box.

The shackles
“It’s been great,” he says as he reflects on what has been a remarkable campaign to date. “Stephen hasn’t put the shackles on at all. He’s told me to get forward whenever I can and I’ve been really enjoying it.”

Critically, he insists, the manager has assembled a team comprised in every area of players that are on the same wavelength and who get the ball down and play football.

“Stephen’s ambitious and he’s clear about the way he wants the team to play; as soon as I saw that he wanted to build his team around the likes of Andy Boyle and Stephen O’Donnell I knew that it was going to be a good team to play in.”

The relationship has been mutually rewarding with Towell thriving in a team set up to encourage individual and collective enterprise and Dundalk, who have been the surprise package of the league season, at their very best when the 22 year-old is in full flow, controlling not only the direction of things but all the tempo while chipping in with the odd crack at goal too.

His resurgence hasn’t gone unnoticed with a couple of English clubs sending representatives to the win over Sligo and there may be more tonight for the cup game against Limerick.

“I try to take it all with a pinch of salt. I’ve been having that sort of thing all my life to be honest; even when I was straight out of Celtic I was supposed to be going here, there and everywhere and none of it came to anything.

For the moment I’m just trying to focus on playing my football and winning the league,” says Towell.