Sligo come from behind to shock Cork at Turner’s Cross 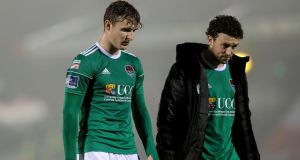 Cretaro struck seven minutes from time, set up by Caolan McAleer – the last team to beat City at the Cross in the league were Sligo on August 18th last year. The result means that City are now six points behind Dundalk at the top with six games remaining.

The champions, held by St Patrick’s Athletic in their previous home game and with four changes to their side from that outing, had begun in a lively fashion and had the lead inside eight minutes. Having been fouled for a free kick to the left of the area, Karl Sheppard did well to meet Barry McNamee’s delivery, glancing the ball past Mitchell Beeney in the visitors’ goal.

Sheppard had a couple of efforts off-target as City looked to build on that lead, but overall their urgency wasn’t as apparent and Sligo began to come into the game more. They were playing nice football, athough without piercing the City rearguard, their best chance of the half a long-range shot from Cawley which was straight at Mark McNulty.

There was always the sense that the Rebel Army needed a second to insulate themselves and Garry Buckley had an early header wide but Sligo were coming strongly and Sheppard had a to clear a Patrick McClean header off the line just before the hour.

City sub Kieran Sadlier almost scored with his first touch, his free kick back off the post, but Sligo were level on 71 as Cawley converted the rebound when McNulty parried a Rhy McCabe free kick and Cretaro completed the turnaround.

City pressed late on but Sadlier’s shot was straight at Beeney while a Jimmy Keohane cross might have dropped in but was dealt with.