Sligo come flying out of the traps to dispatch Derry 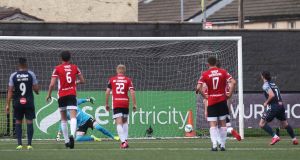 Pointless before their return to action at the Brandywell on Friday night, Sligo Rovers produced a professional performance to mark their return with enthusiasm.

And their opening win of the shortened 2020 campaign against a frustrated Derry City will have given Liam Buckley a significant confidence boost.

Happy to move the ball forward at every available opportunity, the Bit O’Red reaped dividends with industrious striker, Ronan Coughlan, causing no shortage of problems for the home lot.

In fact, it was Coughlan who floated his side’s first corner kick into the danger area in the 19th minute, a cross which saw centre-back, Kyle McFadden head firmly into the Derry net from 10 yards.

On the rare occasion the home side did threaten during the opening period, Garry Buckley did well to deflect a Walter Figueira shot wide of his goal in the 35th minute.

And five minutes before the break Derry were presented with another chance to restore equality but Conor McCormack’s shot was blocked by a defender and the chance was lost.

Derry’s woes were compounded within five minutes of the second half when centre-back, Eoin Toal, impeded Sligo hitman Coughlan inside the penalty, forcing referee Paul McLaughln to point to the spot.

Coughlan dusted himself down and casually stroked the ball low into the corner to double his side’s lead.

Delighted with their two goal cushion, Sligo were happy to control the possession and hit on the break with pace when such opportunities presented themselves.

With the match statistics showing that Derry failed to force Sligo goalkeeper Ed McGinty into a serious save throughout the game, the Candystripes will certainly hope for better days in the season ahead.

In fact, four of their five new signings watched from the terraces as team boss, Declan Devine, appeared a frustrated figiue.