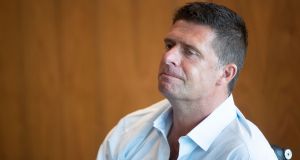 Niall Quinn is currently out of contract with the FAI. Photograph: Tommy Dickson/Inpho

Niall Quinn lists his own future as one of the many things that is on hold until after Monday’s FAI EGM, at which delegates will be asked to approve an agreement with Government that has divided the association in recent months.

Quinn, along with Roy Barrett and Gary Owens, has sought to persuade those with votes that the deal is the best the association can hope for in the circumstances and that the terms need only be temporary if the organisation can re-establish its financial independence.

There remains a good deal of anger about the conditions laid down in the Memorandum of Understanding (MoU) back in January, however, as well as the way in which the negotiations that finalised the deal were handled by Barrett.

Efforts are continuing to find an accommodation that will address the ongoing resistance to changes in the membership of the association’s Council, something Quinn believes can be achieved by the weekend. At a media event to promote the WatchLOI streaming service as the shortened League of Ireland season moves into its second half, though, the former international refused to predict the outcome of Monday’s meeting, one he still claims is absolutely critical to the association’s immediate future.

His own appears to be on the line too. The 53-year-old suggested recently that there would be a role for him at the association but he is currently out of contract and he declined to comment on Tuesday beyond observing that it is something to be addressed next week.

“I’ve not been as involved as I was in the last few weeks but I have helped out with a couple of things that needed fulfilling,” he said. “Like everybody else on Monday, we will start to see what way the future looks. Monday is a significant event for everybody here. It was always the plan to re-evaluate things if and when the MoU is adopted. . . or not.

“There’s stuff that is enjoyable to do, there’s other stuff. . . there’s no doubt there was hostility, in small pockets. Some public, by design; some private. But I really like working with the staff here so we’ll all have to see how it goes on Monday.”

Quinn sought once again to provide reassurance that he, Barrett and Owens had not, as former members of the “Visionary Group”, staged any sort of orchestrated takeover and insisted that new governance conditions need only be adopted for the short to medium term.

“If we go where most people in the game want it to go, I think they’ll find quickly that this isn’t a power grab, that this is just a period of correction that needs to happen, unfortunately. The issues that are arising pre-vote will not have any bearing on how the FAI operates post-vote.”

He suggested, however, that the association has little option but to play ball with the Government at present, a strategy that has, he observed, extended to the organisation’s public stance on coronavirus restrictions that are impacting on the game at all levels .

“It’s a delicate discussion right now,” he said. “I know the GAA have sort of got vociferous about their lot in the last week or two but we purposely haven’t been. The government have been good to us: football. We hope they will be even more so after Monday. I think we’re desperate for the game to get to a better place so that fans can come back but we just have to listen to orders.”

He acknowledged, meanwhile, that the defection of Oxford United midfielder Mark Sykes from Northern Ireland over the weekend might make relations with the IFA a little bit chillier for a while.

“We speak to them regularly and that didn’t generate great enthusiasm from their side although I wouldn’t expect it to. I think it’s a rule that we’ve had for us going right back to Alan Kernanghan’s time, which is when I first really remember it. We haven’t really had it go against us. The guy (Sykes) is so determined but I wouldn’t imagine they will be enamoured.”

Stephen Kenny might be a little less so too after Tuesday’s friendly between Sykes’ club and Premier Division outfit Crystal Palace at Selhurst Park in which James McCarthy was injured.

The Republic of Ireland midfielder, for whom Kenny had outlined a key role when naming his first senior squad on Monday, limped out of the game after 20 minutes after being on the receiving end of a heavy challenge.

The 29-year-old, who has not played for Ireland since 2016 due to a couple of serious injury problems, received treatment on his right ankle but the club provided no immediate detail on the seriousness of the setback.

The Irish squad is due to assemble in Dublin this Sunday before travelling to Sofia for their opening Nations League game against Bulgaria after which they will play Finland back at the Aviva stadium on Sunday week.