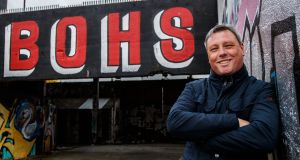 Keith Long: “Ultimately I’d like to get to a full-time position with the club, or in football, in this country. Bohemians have shown their faith in me by offering me this deal.” Photograph: Tommy Dickson/Inppho

With everything bar the lower mid-table order of things already decided ahead of the final round of Premier Division games, Bohemians have followed St Patrick’s Athletic in mapping out their managerial plans for the future with Keith Long signing a new three-year deal with the Dalymount Park club.

Long had made no secret of his desire to go full-time in the game and though his new deal is not quite that it is, he hopes, something that can serve as a stepping stone for both parties.

Meanwhile, the development of a young squad that has, on its day, played some of the league’s most exciting football this season, continues apace.

“We still have to iron one or two things out but in principle it’s been agreed and I am in negotiations with my own job to get to a part-time scenario,” he says.

“Ultimately I’d like to get to a full-time position with the club, or in football, in this country. Bohemians aren’t in a position to do that at the moment but they’ve shown their faith in me by offering me this deal.”

Long is, he says, a long way down the road with his squad preparation for next season. Shane Supple and Darragh Leahy, the club’s two representatives in the PFAI Team of the Year, will be there as will the likes of Derek Pender, Dinny Corcoran and Rob Cornwall.

The most obvious loss at this stage is likely to be Daniel Kelly who is currently on course to join Bolton Wanderers.

Friday’s visitors, Dundalk, are bound to have at least one eye on the cup final but they will be without injured midfielder Robbie Benson for sure. Their opponents next week, Cork City, have Conor McCormack back from suspension and a couple back from injuries as they welcome already-relegated Bray.

Limerick head to Waterford, meanwhile, for their final run out before Monday’s first play-off game, away to Finn Harps. And Shamrock Rovers are at Sligo who are understood to have made it clear to Liam Buckley that their manager’s job is effectively his to refuse.

Long, meanwhile, has expressed surprise over the criticism in Scotland that has followed the decision to push Bohemians’ Irn-Bru Cup quarter-final game with East Fife back into February after the League One side declined to come to Dublin next weekend.

Peterhead boss Jim McInally, whose side was eliminated by Bohemians in an earlier round, called on the competition’s organising committee to resign over the delay in getting the game played and St Mirren technical director Gus McPherson suggested that the competition was being run more to suit “political agendas” than Scottish clubs.

“I can understand why there’s been a little bit of a fuss made about it but my understanding of the situation was that there were assurances given by the FAI that the SFA would look at the fixtures sympathetically if an Irish club made it to the quarter-finals and I took that to mean that games would be kicked back or forward.

“I don’t think any of this has come from East Fife who seem to have had a bit of an issue with the cost of travel and accommodation for next weekend when we wanted to play the game.

“We’re now looking at using it as our last game before the start of the new league season and they’ll be bang in season at that stage so I would have thought they might see that as an opportunity.”

“We’ve really enjoyed it, though, we learned a lot about ourselves playing in the competition. Going away to Peterhead was really good for the group; it brought us together. It gives you an indication of what European football would be about, the preparation and all the rest of it. We came through the Sutton game well too so I think it’s been very positive. It has given us new experiences, playing against new opponents.”