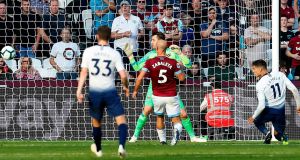 Erik Lamela marked his first Premier League start of the season by firing Tottenham to a 1-0 victory at West Ham.

The Argentinian attacker was preferred to fit-again Christian Eriksen by manager Mauricio Pochettino and repaid that faith with a first-half winner.

Victory in a feisty London derby meant a fourth straight league win for Spurs to lift them into the top four.

However, back-to-back defeats for West Ham means their recent revival has hit the buffers, their promising start to the afternoon turning sour seven minutes before the interval.

Already missing six players through injury, the Hammers lost Andriy Yarmolenko to what appeared to be a serious Achilles problem which saw the winger depart on a stretcher.

If it is a recurrence of the injury he suffered at Borussia Dortmund at the start of the year Yarmolenko could be set for an extended spell on the sidelines.

The Hornets bagged their 50th Premier League win after Etienne Capoue and Roberto Pereyra struck inside a minute midway through the first half at Molineux.

It was Watford’s first win in six attempts and lifted them above Wolves into seventh.

Defeat ended Wolves’ six-game unbeaten run as Watford breached a defence which had conceded one goal in their past seven games in all competitions.

Ivan Cavaleiro wasted Wolves’ best chance in the second half as they slumped to their first home league defeat since January.

Beram Kayal’s close-range finished handed Brighton a first Premier League away win in almost 12 months as they condemned Newcastle to a 1-0 defeat.

There was a touch of fortune about Kayal’s 29th-minute strike as he deflected home Jose Izquierdo’s volley, on an afternoon when striker Glenn Murray left the field on a stretcher with a head injury.

It left the Magpies without a win from their opening nine league fixtures, an unwelcome first, and having won just one of their last 15 games in all competition. It is their worst start to a Premier League season.

The defeat was all the harder to take for manager Rafael Benitez as he saw his team create more than enough chances to take at least a point, but fail to take any of them with Ayoze Perez guilty of an early miss which might have changed the face the of the game.

They slumped to the foot of the table as a result and while Benitez may not fear the sack, the pressure is starting to mount.

Southampton failed to score for the fourth successive Premier League game as they held high-flying Bournemouth to a 0-0 draw.

Saints played their part in a tight encounter at the Vitality Stadium but struggled to create and have now gone 385 top-flight minutes without finding the net.

Bournemouth, who maintained their unbeaten home record with the stalemate, were also guilty of lacking a cutting edge and needed 72 minutes to produce an effort on target.

Pierre-Emile Hojbjerg threatened three times from distance for the visitors, while Adam Smith, David Brooks and Joshua King squandered decent openings for the home side.

Cardiff climbed off the foot of the Premier League by beating Fulham 4-2 to record a first win of the season.

Fulham laid claim to the goal of the game through Andre Schurrle’s majestic early strike, but the league’s leakiest defence soon conceded twice to the excellent Josh Murphy and the energetic Bobby Reid.

These two sides were familiar foes, with Cardiff having edged out Fulham for second spot in the Championship last season, leaving the Cottagers to rely on the play-offs to win promotion.