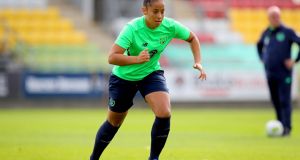 Rianna Jarrett of the Republic of Ireland Women’s squad training at Tallaght Stadium for the clash against Northern Ireland. Photograph: Ryan Byrne/Inpho

Rianna Jarrett could well round off a remarkable return from injury by starting for the Republic of Ireland in Tallaght on Friday afternoon (kick-off 5.30) with the 24-year-old Wexford striker in back in contention thanks to an outstanding season at club level.

On the fact of it there is little to play for against Northern Ireland in this final World Cup Group Three game with qualification and playoff spots to be decided in the game between the Netherlands and Norway with the Dutch needing a point to be sure of progressing.

But manager Colin Bell is adamant his team “needs” a win in order to underline the progress he feels has been made over the course of the campaign.

“We have to be on toes for the whole 90 minutes because the players have struggled at times to maintain concentration levels. That cost them dearly in the games against Holland and Norway, where we switched off for just a split second and it was enough for them to score. We have to show that we learned from that experience,” he said.

Despite his desire to win, Bell may well use the game to weigh up a few slightly different options, including a shift in formation, and if he opts for two strikers then there is every chance that Jarrett, who has battled her way back from three separate Anterior Cruciate Ligament (ACL) injuries, might get to start.

“It’s amazing that she’s even on the pitch,” said Bell.

“It shows great determination and we just hope now that she stays healthy. She’s had a good season at Wexford (where she has 25 goals in 14 games) but Rianna Jarrett, with her match intelligence and her technical ability, has the potential to be one of Ireland’s best players but she has to achieve the level of fitness required to show that.”

Bell believes that there is a much wider problem in the women’s game here that is related to the amount of time players get to spend at training or in games.

“We need to improve when we have the ball,” he says. “If you are not comfortable in possession then you are always going to be on the back foot and so we have to use the ball more effectively when we have it and that’s what we have been working on this week.

“The players here are as prepared as they can be in a few short sessions but if we are to change things in the long term then the real work starts at kids’ level. It can be done but it has to be done at underage levels by making sure that players get to train far more and don’t have their games cancelled.

“I know for a fact that we played the elite phase of the U-17 European Championships in Germany there recently I had players who normally play two times a week and a couple of them hadn’t played at all for weeks. We were playing against Germans who train six times a week. Some of the smaller countries – Iceland with 350,000 people – are doing that too.

“I’m not being negative, we can change that if we can get everyone on board. But it’s another reason why it’s important that the senior team does well. We want the kids who are playing to have role models and it’s important that everyone can see that we are moving forward, that we are taking the women’s game seriously which we are. The FAI has given me incredible backing.”