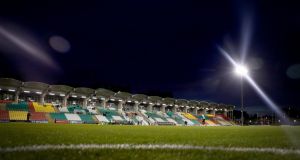 Shamrock Rovers will resume their bid for a first league title in nine years when they host Finn Harps at 5pm on Saturday, August 1st at Tallaght stadium. The Dublin club have led defending champions Dundalk by three points and arch cross-city rivals Bohemians by six with five games played since the campaign was suspended at the start of March.

The restart will get under way with the meeting of Derry City and Sligo Rovers at 5.45pm on Friday, July 31st with Dundalk taking on St Patrick’s Athletic in a game that will be televised by RTÉ2 a couple of hours later that evening. The first round of fixtures is completed by Shelbourne against Waterford on Saturday afternoon at 2pm followed by Cork City v Bohemians the following afternoon.

As things stand it is expected that up to 500 people will be allowed to attend the games but with elements of the Government roadmap having previously been brought forward, there are hopes that that number will increase over the coming weeks or, at the very least, as the campaign progresses through August and September.

It is due to conclude at the end of October, although the FAI Cup will run into the following month with clubs wrapping up their seasons as they are knocked out of the quarters or semis. The final is pencilled in for October 29th.

With the competition limited to Airtricity League clubs for this season, just six will play in a first round that will be staged on Monday, August 10th and Tuesday 11th. Finn Harps will host St Patrick’s Athletic on the first evening with Longford travelling to Cork and Waterford to Dundalk the following night.

With all of the top-flight games set to be made available to supporters to watch via a new streaming service, kick-offs have been staggered for the first six of the remaining rounds of matches. After that, the schedule has a very familiar look about it with matches fixed for Friday nights but those kick-off times will be confirmed closer to the time.

Two of the key tests for Rovers will come three weeks apart in September with the derby against Bohemians set for Saturday the 5th and the trip to Oriel Park, Friday the 25th.

In the First Division, leaders Cabinteely will be in Galway for their first game back while Drogheda United travel to Tallaght to face Shamrock Rovers II and UCD host Longford Town.