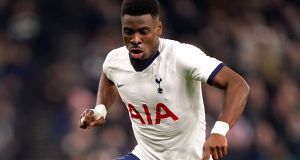 A club statement read: “The club is deeply saddened to confirm media reports that Serge Aurier’s brother passed away in the early hours of this morning.

“We are supporting Serge at this difficult time and we ask that the privacy of the player and his family is respected.

“Everybody at the club sends their sincerest condolences to Serge and his family. Our thoughts are with them all.”

Reports surfaced in the early hours of Monday that Christopher Aurier had died after his body was reported to have been found in Toulouse.

He was shot at a nightclub in the city, according to La Depeche, a French media outlet.

Tottenham have confirmed his death and are supporting the Ivorian right back, who signed for the club in August 2017.

Aurier played the full 90 minutes during Tottenham’s 2-1 win over Arsenal on Sunday, which lifted Spurs above their north London rivals.

Spurs are next in Premier League action on Wednesday when they take on Newcastle at St James’ Park. – PA/Reuters

1 James Ryan injury could open the door for Ryan Baird
2 Ken Early: Frank Lampard’s problems start at number one
3 Series is gone but Kevin O’Brien and Ireland playing for ‘individual pride’
4 Shane Lowry finds some welcome form as US PGA looms
5 Man United in talks with Dortmund over €100m deal for Sancho
Real news has value SUBSCRIBE
Crossword Get access to over 6,000 interactive crosswords