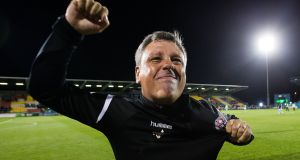 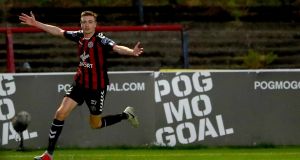 Their slow start to the season now a distant memory, Keith Long is hoping for a big finish by his Bohemians side with the Dubliners just a repeat of their recent defeat of Cork City away from a first cup final for a decade. Just don’t try telling the manager that the home side might actually be seen to start as favourites on Sunday afternoon.

“No, there’s not a good time to get Cork City, you would take them lightly at your peril,” he says. “It’s effectively a one club city down there and they will have come under some scrutiny since we beat them last time. Everything will have been under the microscope and everyone will have been hurting over the way the league has gone. This is the only chance of silverware they have left to play for so it will be a massive challenge.”

John Caulfield, though, must pick his players up after a succession of setbacks has effectively ended their hopes of retaining their league title, while Bohemians are riding high on a run of nine straight wins, one of them that 4-2 defeat of City a couple of weeks back.

The visitors are unlikely to play quite so poorly this weekend but the bigger question for Long is whether his side can perform as well.

“If our lads play to their maximum then we have a chance,” he says, “if not, then Cork have beaten us three times this year we’ve just won that once. That’s the task we face.”

Their season, to be fair, has been a slightly odd one. Almost half of their points, 19 of 43, have come from games against just two clubs, Bray Wanderers and arch rivals Shamrock Rovers, and there were some points left behind over the opening months of the campaign. Nobody, though, has beaten them since late July when Dundalk did, so it is hard to imagine the City players feeling any more confident just now than their hosts.

“We struggled for goals at the start of the year,” says Long. “We lost Izzy [Akinade], Fuad Sule and Warren O’Hora and goals were a problem for us. Dinny [Corcoran] started the season slowly but he had a niggle and that meant that we had to play Eoghan Stokes as a nine when he’s not necessarily a nine.

“But we were able to bring in Dan Kelly in the window and he changed the dynamic of the team, gave us a little bit more of an outlet and so we have been able to get players forward faster in support of Dinny Corcoran, which has gone well for us.

“Dylan Watts left when he wanted him to stay but JJ Lunney and Keith Buckley have become our six and eight and the games have been mainly Friday to Friday, which has given us more time for preparation. It took time but things have come together.”

Making it to the Aviva in November would, Long says, mean “everything” to a club that endured some difficult times after its finances crashed with the end of the building boom and it had to take some time to figure out just what exactly it was attempting to achieve.

The subsequent reinvention, or reconnection with its roots, has been one of several really positive structural developments at league clubs around the country over the past decade. It has clearly presented challenges as well as opportunities to a young manager who has done well but craves the opportunity to push on and compete with more professional outfits, rather than forever hoping his players can punch above their weight.

“To break in into the top four takes further investment and at this moment in time that doesn’t really fit in with what the club is doing,” he says. “It’s a membership club, that’s the way it is but it means that we are restricted in terms of what capital we can bring in.

“The people who are running the club are very conscious of where the club was a few years ago; they don’t want to be in that situation again and that is correct. They are doing their very, very best. I push them; that’s part of my job, but I also respect their decisions and I have an understanding that the club has to be sustainable because you can’t just throw money around that you don’t have. At the same time we [he and his backroom staff] are at the football end of things and want to be as competitive as we can, we want to bridge the gap we want to win silverware.”

If they secure European football for next season it may persuade those running the club to give Long the sort of resources and expanded role he would love to have; things he feels would better equip him and the club to compete.

“As far I’m concerned, the board are aware that I’d like at some point to go full-time in football if it’s feasible. As things stand I combine what I do at Bohemians with a full-time day job with DBC Group and that’s quite challenging but I’ve good staff and systems in place that allow things to function.

“It would excite me to be full-time and maybe have some of the resources that some of the other clubs have; to test myself, to see what I am capable of. There is huge potential at Bohemians and I think my business background and skill sets could be put to better use there if I was working in a fulltime capacity. But is that going to be possible any time soon? I’m not so sure.

“On the one hand the link up with St Kevin’s is something that could be developed, but on the other maybe the redevelopment of Dalymount will take the club in a different direction.”

Inevitably, a cup success might enhance his career options but there are much bigger and better reasons to want a win over Cork on Sunday. City may need the win more just now but Long insists that Dubliners will want it at least as much as he rattles off names of backroom staff, club officials and, of course, players to whom a cup final would mean far more than some chance at securing a consolation prize.

“We won’t always get the best players but we have to have the hungriest ones, players with a desire to do better for themselves; that, for me, has got to be part of the DNA of a Bohs player. It will be a tough game on Sunday for us but are we capable? I think we’ve shown we are capable.”