Roofe and Cooper goals puts Leeds back on top of Championship 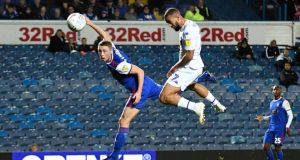 Kemar Roofe of Leeds United beats Matthew Pennington of Ipswich Town to the ball to head in the opening goal during the Sky Bet Championship match at Elland Road. Photograph: George Wood/Getty Images

Leeds returned to the top of the Sky Bet Championship as Derby routed West Brom at The Hawthorns.

Marcelo Bielsa’s Leeds beat Ipswich 2-0 thanks to goals from Kemar Roofe and Liam Cooper as they went above Middlesbrough and Sheffield United on goal difference at the summit.

It was just Leeds’ second win in six outings as they moved up from fifth ahead of Saturday’s visit of Nottingham Forest.

Paul Hurst’s Ipswich remain bottom and are now four points from safety having won just once this season.

Derby demolished West Brom 4-1 at The Hawthorns as Frank Lampard’s side motored into fifth.

Jack Marriott cashed in on Jay Rodriguez’s poor back pass to open the scoring before Tom Lawrence fired in off the post to put Derby 2-0 up after 15 minutes.

Liverpool loanee Harry Wilson added a third five minutes after the break from the edge of the box as Albion slipped to back-to-back defeats for the first time this season.

Local boy Scott Malone, who was born five miles from The Hawthorns, drilled in with 20 minutes left before Rodriguez’s late consolation.

Forest, who were 12th at the start of play, are just two points behind sixth-placed Norwich – who they lost to at the weekend.

Preston climbed out of the relegation zone with a 4-3 victory over Brentford.

North End raced into a 3-0 lead inside the opening 30 minutes at Deepdale through goals from Republic of Ireland internationals Alan Browne and Callum Robinson and one from Tom Barkhuizen.

Brentford rallied and Sergi Canos and Ollie Watkins made it 3-2 before Robinson grabbed his second – and seventh of the season – to restore Preston’s two-goal advantage.

The Robins are two points behind the play-off spots while Hull remain second bottom.