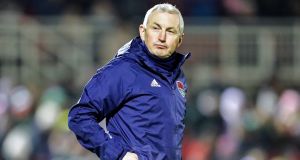 Cork City strengthened their lead at the top of the table with a devastating display at the Showgrounds.

Graham Cummins hit a hat-trick and won a penalty converted by Kieran Sadlier, as City proved too strong for ten-man Sligo.

In front of 1,842, Cork netted twice in the opening 11 minutes. And when Rovers gifted them a third at the start of the second half, it rendered Adam Morgan’s penalty for the Bit O’ Red as mere consolation.

Shane Griffin’s crossfield ball on three minutes free picked out Karl Sheppard, who at the second attempt crossed for Cummins to nod home at the near post.

Cork were then awarded an 11th minute spot-kick when Cummins went to ground under the challenge from Seamus Sharkey, and Sadlier made no mistake as he duly fired home.

Strugglilng Rovers went 3-0 down as Beeney rolled a ball out to Kyle Callan-McFadden, whose attempted return ball was seized upon by Cummins for his second goal of the game .

Sligo pulled one back through Adam Morgan’s spot-kick but after the home side’s Rhys McCabe was sent off late on, Cummins tapped home to complete his hat-trick and conclude the scoring.

Waterford continued their strong return to the top flight by recording a deserved win over St Patrick’s Athletic with a goal in each half at the Regional Sports Centre.

Their adventurous start to the game was rewarded on 10 minutes by Kenny Browne heading in the opener against his former club and a screamer from Bastien Héry on 61 minutes wrapped up the points.

Kevin Toner was fortunate not to divert Izzy Akinade’s left-wing cross into his net but St Pat’s wouldn’t be so lucky from the resultant corner.

In a well-worked set-piece, Browne raced to the near post to connect with a corner from captain Paul Keegan and the centre-back’s flicked header found the roof of the net. Waterford’s tempo didn’t relent after the interval and Barry Murphy twice had to be at his best to deny Akinade and Courtney Duffus.

All the pointers indicated a second Waterford goal was coming and it duly arrived in sensational fashion. Courtney Duffus showed great composure to lay the ball back and following up to rifle a shot home from 30 yards was the influential Héry.

Liam Buckley’s lacklustre side were unable to mount a fightback and as a result Waterford move into second spot.