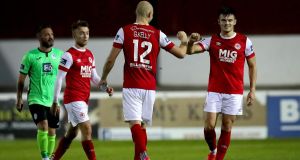 Georgie Kelly scored twice to mercilessly down his home county team with his first goals for St Patrick’s Athletic.

Donegal native Kelly, on loan from champions Dundalk, struck twice midway through the first half against Finn Harps.

The much improved performance, and result, was just what St Pat’s coach Stephen O’Donnell ordered after last Monday’s home defeat to Derry City. It edges St Pat’s up to fourth place in the Premier Division table overnight as Harps slumped to a fifth successive defeat.

With Robbie Benson playing in an advanced role behind Kelly, St Pat’s started on the front foot, enjoying all the early possession. But it was Harps who carved the first half chance of the game following an 11th minute corner - Tony McNamee’s deflected shot comfortably gathered by Brendan Clarke.

It mattered not, though, as St Pat’s took the lead with a delightfully worked goal on 14 minutes. David Titov raided down the right to feed Benson inside him. The Athlone native used his strength to turn his marker before slipping former Dundalk team-mate Kelly in with a sublime pass and he drilled a shot beyond Mark McGinley.

A dreadful defensive blunder then gifted the home side a second goal on 27 minutes. There was no pressure on Kosovar Sadiki from McClelland’s header forward, but the Canadian central defender’s attempted back pass was under hit allowing Kelly to take the ball around McGinley and tap home his second goal.

Having saved a Rory Feely header moments earlier, McGinley deprived Kelly of his hat-trick on 62 minutes when saving well with his body after McClelland slid him through one-on-one.

The sides meet again at Finn Park on Monday night in the first round of the FAI Cup.