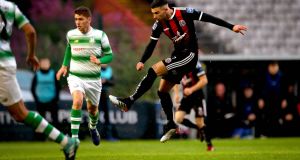 There is something that defies logic about Bohemians’ current run of good results against their cross-city rivals but that only seems to add to the enjoyment around Phibsborough where the home side’s support gave every impression of having enjoyed this seventh win in a sequence of eight games undefeated against Shamrock Rovers even more than usual.

It might have been the handicap of Keith Long having to field a slightly second-string back four, the sensational Danny Mandroiu strike that restored their lead when it seemed the game might be slipping away from them. Or perhaps it was just all that relief after the pre-match fear that a touch of reality would return to the situation and the team that was 10 points better in the table coming into the game would back that up with victory in it.

Whatever aspect the individuals cherish most, this is a night that will be fondly remembered by those among the Dalymount faithful who were there to see it.

Not for the first time in these games this season the referee managed to take centre stage in a way he probably wished he hadn’t. The bigger decisions made by Rob Harvey and Paul McLaughlin in Bohemians’ two previous 1-0 wins, penalties and red cards in each instance, had effectively decided those encounters for better or worse and here we had Rob Rogers handing the home side not one first-half spot kick but two.

The visitors, you might argue had no complaint – Jack Byrne had clumsily taken Kevin Devaney down for the first, Greg Bolger did much the same to Ryan Swan for the second – but complain they most certainly did.

Mandroiu, as it happens, had his first saved really well by Alan Mannus but switched sides for the second and succeeded in sending the northerner the wrong way. “Shamrock Rovers, it’s happening again,” the locals sang joyously from the main stand and their rivals probably agreed, the only point of contention being what exactly “it” was.

Adding, no doubt, to the sense of shock for Stephen Bradley’s side was the fact that they had been generally the better side through the opening stages with Byrne, Ronan Finn and hero turned villain Dylan Watts producing some remarkable moments of individual skill.

From one of Byrne’s early corners, Dan Carr looked to have scored but Andy Lyons, on another night when he underlined his enormous potential, cleared brilliantly off the line and the home side’s goalkeeper, James Talbot, survived a couple of uncharacteristically wayward moments.

Six minutes into the second half, he and pretty much his whole defence seemed to switch off momentarily, though, and this time they were punished with Finn lifting the ball over the back four and Carr’s producing a really lovely finish with the outside of his right boot.

Better, much better, followed not long at the other end, however, as an attempted clearance by Trevor Clarke was cut out, Bohemians worked the ball across the pitch to Mandroiu and the 20-year-old produced a quite spectacular left-footed drive that soared beyond Mannus’s outstretched hand and into the top right corner.

Rovers somehow managed to up and an already high tempo to chase the game after that and Long’s side were made to scramble by for a spell.

Still, they threatened on the break, though, and went very close to doubling their lead when Swan’s follow-up shot looked to be goalward bound until Roberto Lopes seemed to stop it with an outstretched arm. That could well have been the sending off this instalment of this rivalry was missing up until that point. The referee gave nothing, however, and Keith Ward couldn’t quite put the loose ball away.

There were a couple of appeals in and around the Bohemians area too but the most significant thing that Rogers gave Rovers was eight minutes of injury time in which to save themselves. They gave the effort everything and with the locals looking increasingly anxious as they held desperately on, it was thrilling stuff.

When it was finally over, though, only one set of fans was actually thrilled. “Shamrock Rovers,” they sang, “it’s happened again.”