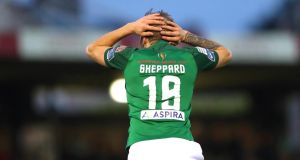 Karl Sheppard scored twice to ease holders Cork City into the semi-finals of the FAI Cup as they simply had too much for First Division Longford Town at City Calling Stadium.

Longford were compact with a good shape to them as they frustrated Cork early on. But Cork passed the ball well and their patience paid off as they took the lead on 24 minutes.

Longford keeper Jack Brady initially tipped a stinging drive from the Jimmy Keohane around the post. But Kieran Sadlier took the corner which sailed across to directly enter the net at the far post.

Four minutes later Cork doubled their lead, carving Longford open a little too easily. Shane Griffin’s cross from the left wasn’t cut out and Keohane had time and space to shoot to the corner of the net with the help of a slight deflection.

Though Stephen Dooley scuffed a shot wide with the goal gaping, Cork got their third goal a minute before half-time. Brady slipped as he came out to claim Greg Bolger’s ball over the top and ended up taking down Sheppard to concede a penalty.

Sheppard duly stepped up and sent the keeper the wrong way from the spot.

Cork stretched their lead six minutes into the second half. Substitute Connor Ellis put a sublime ball over the top for Sheppard who showed good composure to rifle to the net.

Robbie Williams sliced Peter Hopkins’ cross over his own keeper Mark McNulty to gift Longford their goal on 62 minutes.

But the defender made amends minutes later, somehow clearing a shot from Davy O’Sullivan over the bar.