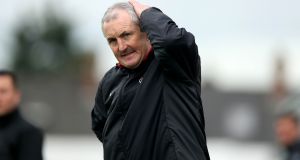 Cork City will look to extend their remarkable winning start to the season by beating St Patrick’s Athletic this evening in Inchicore where the hosts could be without striker Christy Fagan or former City defender Darren Dennehy (hamstring and ankle respectively).

City have won their opening nine games but the hosts will be desperate to bring the run to an end, get something out of the game and, perhaps, climb out of the relegation zone at the same time.

Dundalk find themselves under early pressure to keep pace with their rivals in the wake of their surprise defeat last week by Bray Wanderers.

Stephen Kenny’s men face a Bohemians side that has lost its last three league games in a row but the champions continue to miss established players with Robbie Benson and Sean Gannon both out. Stephen O’Donnell may well start after featuring against UCD in midweek but Paddy Barrett and Niclas Vemmelund are both rated as doubtful.

James Doyle returns for the visitors while Ian Morris has a chance of starting and Dinny Corcoran looks set to make the bench.

Bray have Conor Kenna back to face his former club, Shamrock Rovers, who may well be without midfielder Ryan Connolly. Danny Devine is a doubt too but Paul Corry comes back into the reckoning and Luke Shaw is available.

Elsewhere, Finn Harps boss Ollie Horgan has six ruled out and others struggling as Drogheda travel to Ballybofey and Shane Keegan must weigh up what changes to make after Galway’s League Cup defeat of Derry as they head to Limerick.

Derry City, meanwhile, head for the Showgrounds with they will look to end their recent run of poor form.