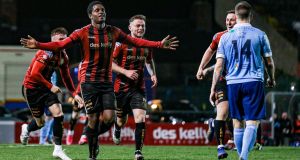 It had been a long time since these two last met in the league and so the home support at Dalymount Park spent the early part of the night taunting their rivals about last year’s cup game, which Shelbourne led 2-0 with 10 minutes remaining but still lost.

As luck would have it, there was the opportunity for the perfect revenge here after goals from Andre Wright and Danny Mandroiu but it wasn’t to be for the visitors, who did much to shape the pattern of this game with their high energy approach, but still came up short again when it came to carving out a result for themselves.

Given the nature of the rivalry, it was no surprise that the game included more than its share of rough and tumble; although you get the sense with this Shelbourne side that every match is going to feel at least a little like a derby.

As it had against Dundalk a couple of weeks back, their willingness to throw themselves into things unsettled Bohemians for stretches, with the home players scarcely allowed a second on the ball to consider their options. The hosts did their best to play a passing game but the pace at which they were obliged to keep things moving meant it would be into the second half by the time they found anything like their stride and amid all the early errors, they failed to force a save from Jack Brady over the first three quarters of an hour.

Shelbourne did a bit better at the other end although a couple of their attempts were straight at Stephen McGuinness and their most threatening assault on the Bohemians area, after Dayle Rooney had crossed following a quickly taken free-kick and Oscar Brennan headed goalwards, ended with Ciaran Kilduff forcing the ball, but also the home side’s goalkeeper, into the Bohemians net.

There was nothing terribly nasty about it, but it wouldn’t be the only time that a player had to pick himself up and take a moment to dust himself down before the game could be allowed to continue.

It all made for an interesting contest in its way although before the goal, at least, nobody could have accused it of being hugely easy on the eye. Kris Twaderk, Andy Lyons and Danny Mandroiu all livened things up at one point or another with surging runs but the Shelbourne half seemed to be riddled with dead ends and Wright looked disgruntled as he wondered, perhaps, what he could be expected to achieve when having to work off this sort of service.

When it finally improved, eight minutes into the second half, the 23-year-old sprang immediately to life. The Shelbourne defence, it seemed, finally switched off for just a moment but the Bohemians attack on this occasion was pretty much perfect. Danny Grant’s floated cross to beyond the far post was turned back by Twardek for Wright who completely wrong-footed Brady with his header to the bottom right corner.

As they had against the champions, Shelbourne reacted to falling behind by turning all available dials up to 11 but within seconds of almost pulling level when Karl Sheppard crossed for Aaron Dobbs whose header was saved, they found themselves two down.

The hosts worked their way out down the right and Twardek’s cross flew just over Aidan Friel to Mandroiu whose chip had just enough on it to elude Grant and a couple of defenders on the way to the roof of the net.

Shelbourne stepped up the chase again but Bohemians held all the cards by now and in the end the closest the travelling support came to having something to cheer about was a glaring miss in injury time by Glen McAuley, who looked certain to round off what was a good win for Keith Long’s side.