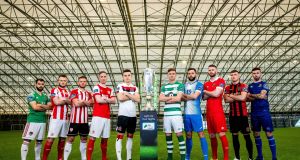 The Airtricity League could be set for an August 1st restart. Photo: Ryan Byrne/Inpho

Interim FAI CEO Gary Owens is expected to provide clarification early next week to clubs on some of the issues raised in the latest round of talks intended to facilitate a return to Airtricity League action. After what had been a difficult few days for the process, however, there was a more upbeat tone after Wednesday’s meeting with several of those who were there characterising it as more positive and constructive.

Although there is said to have been no real change to the pool of money available to clubs to help them with a return, the growing sense of optimism that games could be played in clubs’ own stadiums rather than neutral venues had helped to move the discussions forward, it seems.

In the plan presented by Owens to clubs a week ago, around €1.45 million of the €3.4 million that it was envisaged would come from the FAI in one way or another, was earmarked for the provision of facilities to stage games and the coronavirus-related precautions that would have to be put in place at those venues.

Given the growing confidence that that will not be needed and that there won’t have to be an extensive programme of Covid-19 testing around the games, the intention is that the bulk of the money could now be divided up among the clubs.

With the original formula for allocating cash to clubs also to be abandoned, it seems, Premier Division clubs would be in line for payments around €200,000 apiece with substantially more up front. There would also be support from the association on issues like streaming which, while no longer seen as a likely generator of substantial revenues this year, is still a significant part of the plan, not least for the role it might play in appealing to season tickets holders at clubs where stadium capacities might be very restricted.

As had been anticipated, there was a move to bring forward the restarted season slightly and to shorten it. The latest timings envisaged involve an August 1st start and end of November finish with FAI Cup final retaining its traditional slot at the start of that month.

There was discussion, however, about the possibility of scrapping the FAI Cup for this season on the basis that it would shorten the campaign by around three weeks, something that would cut costs significantly for clubs whose players are due to be out of contract at the end of October.

There was a number of other questions to be addressed in relation to the structure of the restarted league, including how many teams might be relegated, and there are likely to be further discussions in relation to these towards the end of next week.

In the meantime, the clubs are hoping Owens will firm up the funding end of things. He and eputy interim CEO Niall Quinn are understood to remain confident that Government backing will be forthcoming and that Fifa may yet provide money too. More immediately, however, they may well have to persuade the association’s board to guarantee the €2 million required to make up the €3.4 million total, something it initially declined to do a couple of weeks ago when Owens was told that more detail and certainty would be required.

Owens and Quinn are expected to speak to the PFAI on Thursday in order to update the league’s players on the how the process is coming along, but there may also be an attempt made at this point to raise the issue of savings on squad costs with the suggestion made to clubs last week that almost €400,000 might effectively added to the pot in this way.

The proposed earlier start is good news for Dundalk, Shamrock Rovers, Bohemians and Derry City who are preparing to play in Europe but it will increase the sense of urgency as the negotiations drag on towards the end of June.