Academy with an eventful history is about to reach a 4,000th-match milestone against Everton 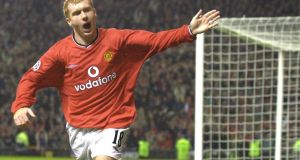 Scott McTominay is the latest poster boy of a remarkable Manchester United academy that has produced the Busby Babes, George Best, and the Class of ’92 and which on Sunday will provide a player to a 4,000th successive match-day squad when Everton visit.

McTominay was blooded when 20 by José Mourinho in a 2-0 loss at Arsenal in May 2017 and by the end of the following campaign had received the manager’s player of the season award.

McTominay, spotted when five and attending a development centre in Preston, is the epitome of a system that has sourced United’s top five appearance makers: Ryan Giggs, Bobby Charlton, Bill Foulkes, Paul Scholes and Gary Neville.

Of the 4,000 mark he says: “It’s amazing. Whenever we were in the youth team we had different members of staff saying to us about the consecutive matches we’ve had a youth player from the academy in. To get to 4,000 is incredible and a real credit to the staff who have invested so much in every player who has contributed.”

This fine tradition began on October 30th, 1937, in a Second Division game at Fulham when Tom Manley and Jackie Wassall were in a United XI that lost 1-0. During the next eight decades the nascent careers of Dennis Viollet (1940s), Duncan Edwards (1950s), Best (1960s), Norman Whiteside (1970s), Giggs (1980s), Scholes (1990s), Paul Pogba (2000s), and Andreas Pereira (2010s) would presage them becoming first-team regulars and taking a place in the roll-call of the academy’s headline successes.

In this billing the Busby Babes and Class of ’92 are prominent. The former were developed under Matt Busby, with the manager’s assistant, Jimmy Murphy, and chief scout, Joe Armstrong, executing his vision.

This stellar group formed the core of the consecutive title-winners of 1955-56 and 1956-57, before eight – Roger Byrne, Mark Jones, Eddie Colman, Edwards, Billy Whelan, Tommy Taylor, David Pegg and Geoff Bent – were killed in the Munich air disaster of 1958, with Jackie Blanchflower’s career finished by the injuries he suffered.

This glittering and tragic history has informed the subsequent culture of the academy, says Nick Cox, who succeeded Nicky Butt as its head in the summer.

“If you think back to what Sir Matt Busby tried to create, he made the point that people who pay to watch have been grafting in the factories all week,” Cox says. “They’re local folk, this is their one release and we have a duty to entertain and show them we’re the same, but just privileged to be on the pitch. When it’s local boys that connection becomes even greater and more powerful.”

Butt, Giggs, David Beckham, Gary and Phil Neville and Scholes became known as the Class of ’92 because of the role the first four of them had in the FA Youth Cup triumph of that year and their status as mainstays of Alex Ferguson’s stellar side in the mid-1990s to early 2000s, whose 1999 Treble triumph remains the English game’s greatest feat.

They were in a second wave of “Fergie Fledglings” developed under the Scot, whose commitment to youth development began with the late-1980s vintage that included Russell Beardsmore and Lee Martin.

Cox follows a long tradition of United talent scouts and developers. Such luminaries include Bob Bishop, who discovered Best and Whiteside; Murphy, who was prominent in healing a near-broken club until Busby recovered, and Eric Harrison, the youth team coach from 1981 until 2008.

Cox says: “What we’re doing here is producing the equivalent of gold-medallists and spacemen who are landing on the moon. To produce young players who are ready to play at Old Trafford is the pinnacle. We’re trying to create a rich ecosystem.”

Many of those who ultimately do not make it at the club have fine careers elsewhere. Cox says: “It’s kids in our first team, kids playing professional football across the country, but, more importantly, kids who have been enriched by the contact they’ve had with us.”

Ole Gunnar Solskjaer was made Mourinho’s successor partly because of his belief in homegrown talent, and the Norwegian has firmly proved his commitment to it.

There are 12 academy players in Solskjaer’s squad. They have played 38 per cent of all first-team minutes in 2019-20 and assisted or scored 31 of United’s 34 goals this season. November’s 3-1 defeat of Brighton & Hove Albion saw United field the Premier League’s youngest line-up this term, with an average age of 23 years and 350 days.

Solskjaer says: “Giving young players a chance is a tradition we are very proud of. It’s part of our DNA and you learn that quickly when you join the club. Young players can only surprise and impress you when you give them a chance to show their talent. The 4,000 is a milestone we are proud of and long may it continue.”

A subplot of the academy narrative concerns those who did not realise their potential. Ravel Morrison is one example, a forward rated very highly by Ferguson but who failed to make a league appearance before leaving the club in January 2012.

Cox says: “Maybe his character has held him back, but he is still a Premier League footballer [at Sheffield United] and doing okay.”

Cox tutored Borussia Dortmund’s Jadon Sancho when both were at Watford. “I’ve known him since he was seven, but Jadon Sancho produced Jadon Sancho,” says Cox. Sancho moved from Watford to Manchester City in 2015 and United face ongoing competition from their crosstown rival in the race to attract talent.

Reminded of how Phil Neville and another former United player, Robin van Persie, chose to have their sons schooled at City, Cox says: “We’ve opted to do things a very Manchester United way. Where we set ourselves aside is that we have got some amazing developers of young people – they are not coaches – who have been here for a long while: Tony Whelan, Dave Bushell, Eamon Mulvey.

“We can register players at nine [and] clubs are active before that trying to assemble players. There is a massive debate amongst Premier League clubs about what should that look like in terms of the commitment you can make to a player.

“We are absolutely – and I think a lone voice – resolute that if you start too soon the love of football is going to vanish. We would be happy to move the age of registration up to sign kids at 10, 11. We want this to look like a childlike rather than a cut-throat . . . environment.

“We’ve always had our eye on the bigger picture. Where are these kids going to be in 10 years? Do we still have kids who are going to play in the first team? If you win at the expense of development, you don’t produce footballers.”

Cox may have a point, as beyond Phil Foden City’s youth system has struggled to produce a first-team squad regular since Micah Richards in 2005.

McTominay describes the values United imbue. “It’s about general standards: being punctual, always wearing black boots until you get to the reserve team,” he says. “There are no big egos, no kids coming in wearing jewellery. If a young player is doing that in the canteen I would certainly be one to say something and the same with other boys in the first-team, and the manager as well.

“You don’t realise how much things like that are going to help. You think: ‘This is rubbish.’ Now I look back and those standards have been passed through, so everybody has the idea of what a Manchester United player should look and be like – the DNA that comes with wearing that badge.”

Cox’s ambition is to produce a fresh wave of talent as impressive as the Class of ’92. “We have to aspire to do that, absolutely,” he says. “We have to believe it’s possible.”