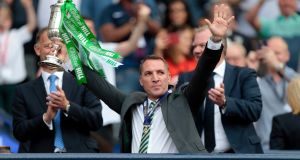 Celtic manager Brendan Rodgers lifting the Scottish Cup at Hampden Park, Glasgow, last May. As he monitored Claude Puel’s downturn at Leicester City, he will have focused not just on Leicester’s wealth and potential, but also on English football’s broader appeal. Photograph: Graham Stuart/PA Wire

Two years ago this month Leicester City defeated Seville 2-0 at home to progress to the last eight of the Champions League. Last Saturday the attendance at Livingston versus Kilmarnock in the Scottish Premiership was 2,569.

These two facts may seem unconnected, but when it comes to assessing why Brendan Rodgers left Celtic for Leicester on Tuesday, they are relevant.

Although the sense of betrayal around Parkhead is clear and felt deeply by Celtic supporters – a feeling exacerbated by the timing of the move – those who find it inexplicable should perhaps consider that Rodgers did not just leave Celtic, he left Scottish football.

It has some attractions, and people were quick to point to Celtic’s last-gasp winner at Hearts on Wednesday in Neil Lennon’s first game back in charge of the Hoops as an example of the range of stories and excitement available in Scotland.

Tynecastle had been the scene of Lennon’s tumble after being hit by a coin while manager of Hibernian last October. There was also a late winner for Hibs on Wednesday at St Johnstone, while Rangers won again under Steven Gerrard in front of 49,000 at Ibrox. Scottish football fascinates a swathe of its audience.

But as Rodgers monitored Claude Puel’s downturn at Leicester City, Rodgers will have focused not just on Leicester’s wealth and potential, but also on English football’s broader appeal.

While the Big Six in England’s Premier League are obvious and getting stronger, there is also the fact that no club has retained the title since Manchester United in 2009.

Chelsea, United again, Manchester City and Leicester are the only four winners since, but if Liverpool push themselves across the line first in May, then it will be 10 seasons without a repeat winner of the Premier League.

There is some diversity within the monopoly and, as Rodgers will have noted, Leicester City’s name is there and wishes to be again. By contrast, Scotland’s top division has not been won by any club beyond Celtic or Rangers since 1985.

Those fans perplexed that Rodgers is not enthralled by the idea of Celtic’s “10-in-a-row” are – in the nicest possible way – very, very Celtic about it. What would be more enticing to an outsider is a serious challenge from Aberdeen, Hibs or Hearts.

And Rodgers, by comparison to those steeped in Glasgow football, is an outsider.

Although he was born and brought up in Co Antrim and had a Celtic awareness as a boy, from the age of 17 to 43 Rodgers was in England. English football was his frame of reference. Reading was where he lived for 14 years. It is 100 miles from Leicester, it is 400 from Glasgow.

There are some around Parkhead who do not realise that, seen from the outside, winning 10 titles in a row, securing a treble treble, is not be seen as a Celtic strength but as a Scottish weakness. There is a good chance Rodgers would once have been one of them.

He will have felt it, for example, when in his first Celtic season a competitive 1-1 draw at Manchester City in the Champions League was followed by consecutive league games against Partick Thistle, Hamilton, Dundee, Partick again, Hamilton again and then Ross County. All, of course, which were won.

Rodgers will say he was genuine in May three years ago when he was unveiled as the ambitious successor to Ronny Deila. Rodgers declared his reverence for Tommy Burns, spoke of watching Celtic play Finn Harps in Ballybofey as an 11-year-old, and said those suggesting Celtic was a step down from his previous job, Liverpool, “don’t know this club. I have come into a huge club here.”

Even scathing Celtic fans might grant him that. What they cannot forgive are subsequent homilies such as: “There is not a place I could be in this world right now where I’d be happier in my football life and personal life. This is Celtic, this is one of the great, iconic clubs of the world.” That was in 2017.

They cannot forgive because they are dedicated to the cause, and Rodgers was their leader.

He will know the club from the inside in a manner that a fan will never know. But it is knowledge gained as a professional, a man with a career; Rodgers will never own the club in the manner of a fan, few players or managers do. Fans possess unyielding lifelong loyalties, professionals take the next job.

Yet the banner at Tynecastle: “Never a Celt. Always a fraud” will hurt Rodgers. His coaching brought Celtic a lot of good days.

This is the disconnection between football professional and football supporter and is, ironically, a reason why Leicester called Rodgers.

In England in the FA Cup there is a growing tension between followers of mid and lower Premier League clubs who long for a quarter or semi-final – never mind a trophy – and managers who don’t.

There was no Harry Maguire, Ben Chilwell or Jamie Vardy when Leicester went out of the Cup at fourth division Newport. Fans were fired up and figures like Vardy, who won the Premier League less than three years ago, do not think the FA Cup is beyond Leicester. After all, when they beat Seville two years ago Leicester met Atletico Madrid in the last eight of the Champions League and only lost 2-1 on aggregate.

Tellingly, after Newport the Foxes lost five of their next six and Puel went. His loss quickly became Rodgers’ post and Lennon’s gain.

Lennon has demonstrated commitment to Scottish football, not just Celtic, over the guts of 20 years. When at Bolton his home address remained in Glasgow.

Even so, Lennon fully understands that a manager’s life is precarious, that a falling out with a board member can lead to dismissal. If another club in another country then offers to double your wages, you go. It is the professionals’ reality.

THE BALLAD OF SEAN AND DECLAN

West Ham United versus Newcastle United, and had Mick McCarthy had been a country and western singer, the Ballad of Sean and Declan.

When on Wednesday McCarthy confirmed he had known for a couple of months of Declan Rice’s decision to opt for England over Ireland, the Irish manager provided a mischievous addendum.

McCarthy said Rice “might just be sweating seeing Longstaff playing at Newcastle, I have to tell you”.

It was a nippy little comment. It showed the sudden prominence of Longstaff, who was on Newcastle’s bench without a first-team debut when Rice was performing admirably in West Ham’s win at St James’ Park in December.

Sean’s name, apparently, does not reveal the Irish ancestry that Rice’s Declan does.

At 21, Longstaff has taken time to come through at Newcastle, whereas Rice, 20, was given his debut two years ago.

Longstaff’s progress has been rapid since the new year. Given McCarthy’s remark, Rice may feel he has a point to prove.

1 Gerry Thornley: England primed to show their best against Ireland
2 Should fans be allowed drink in the stand at sporting events?
3 Stopping Jonny May’s pace must be high in Ireland’s priorities
4 Frank Lampard says Harry Maguire should have been sent off
5 Report states Abu Dhabi covered City’s sponsorship, not Etihad
Real news has value SUBSCRIBE
Crossword Get access to over 6,000 interactive crosswords