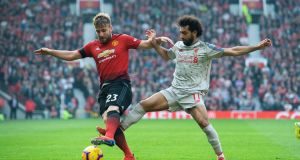 It has been an interesting part of the Ole Gunnar Solskjær revolution at Manchester United – perhaps not the most high-profile but a component nonetheless and an element in the movement that appears to be sweeping the caretaker manager towards the job on a permanent basis.

Luke Shaw was outstanding in the club’s 3-1 win at Crystal Palace on Wednesday, having also starred in the 0-0 home draw with Liverpool on Sunday. According to Romelu Lukaku, the 23-year-old left-back has been United’s player of the season so far. And it has been difficult to ignore the evidence that his performances have gone up a level since Solskjær took over from José Mourinho in December.

The Norwegian has brought liberation to virtually every pore of the club and it has been clear to see how players such as Paul Pogba and Marcus Rashford have thrived under his charge. But Shaw, too, has grown, having been encouraged by Solskjær to play higher up the pitch and express himself more freely. Moreover, and this might be key, he has been able to do so without the fear of reprisals if he makes mistakes.

Shaw had always felt like one of Mourinho’s whipping boys. In March last year, the then manager humiliated him by substituting him at half-time against Brighton in the FA Cup. There were other examples of Mourinho publicly taking him to task: one of the most infamous came in April 2017 when he urged Shaw to change his football brain. It should be noted that Mourinho’s predecessor, Louis Van Gaal, also preferred the stick to the carrot when it came to dealing with Shaw.

Mourinho would argue that the tough love worked. Last October, Shaw was rewarded for his positive start to the season with a new five-year contract; a development that had previously been hard to foresee. Yet what has shone through behind the scenes during Shaw’s trials and tribulations has been his mental toughness.

Mourinho would criticise him over his mentality but it takes a hard edge to withstand the knocks that Shaw has taken, which include the horrific leg break that he suffered in September 2015.

Before the start of pre-season, Shaw took himself to Dubai for a personal training camp with United’s head of strength and conditioning, Gary Walker, and he always believed that this would be the season when United saw the best of him, having taken him from Southampton for £27m in 2014.

Lukaku, who scored twice in the victory at Palace, had no doubts either. “Luke’s our player of the season – from the start until now, he’s been the most consistent,” he said. “Why? His preparation. The whole summer, we were in touch, when I was in Russia [with Belgium for the World Cup], I used to get videos of him working out and stuff.

“I knew that this year would be his year. That’s what I told him, as well, at the end of last season – that he has the potential to be the England left-back for many, many years and for Manchester United, the same. It’s about being that guy.

“The previous criticism did not hurt him. People that don’t know Luke don’t know that he’s mentally really tough. It’s a side that not a lot of people talk about but it has to be known that, mentally, he’s a really strong guy.”

Shaw takes all of the credit for his upsurge but it feels as though he has responded to the tactical and man-management approach of Solskjær who, at present, can do little wrong. Even Lukaku, who has been on the bench more times than he has started under Solskjær in the Premier League, speaks warmly of him.

“I like him,” Lukaku said. “He’s really open, really honest in his communication. He keeps me hungry so whenever I get a chance to play, I just want what’s best for the team and to help the team win.”

The Palace success meant that Solskjær maintained his perfect away record as the United manager – it is now eight wins out of eight in all competitions – while his complete league record reads P11 W9 D2. He could not have done any more to press his candidacy for the post beyond the end of the season because the results have been accompanied by fast and exciting football.

At the heart of everything has been the change in atmosphere that Solskjær has overseen. United have made no secret of how this had to happen after Mourinho. Shaw has enjoyed the benefits.

Ex-Ryder Cup player Gordon J Brand dies aged 65 18:02
McGill in control against Wilson at the Crucible 17:34
US Masters to be held behind closed doors in November 17:18
Bundini Brown: The man who invented ‘float like a butterfly, sting like a bee’ 17:00
Griggs names 36-strong women’s squad 17:14