With the winner of the FIFA Puskás Award due to be announced, today is your last chance to #VoteForSteph. 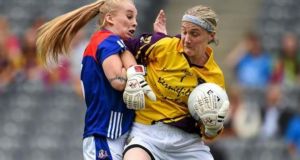 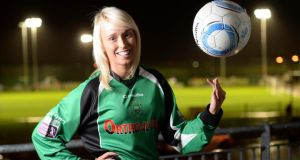 Stephanie Roche gained international attention and a Puskas nomination after the video of a goal she scored against Wexford Youths in 2013 went viral. Photograph: Dara Mac Dónaill/The Irish Times

Goalkeepers never like to talk about the one that got away, but for Mary Rose Kelly, one particular goal in October 2013 simply couldn’t be helped.

Coming up against a formidable Peamount United outfit, the Wexford Youths netminder knew she’d have her work cut out in between the sticks that day.

However, there’s no way on earth Kelly could have envisaged the international attention that game- attended by a mere 95 people- would go on to receive because of one fateful incident in the 48th minute.

“I remember the ball being out on the wing... I saw the first tip and I thought ‘no, there’s not going to be a shot out of this’, and then with the second tip you’re still thinking ‘no, not at all’, and then it went past me and I thought ‘I can’t really believe that just happened’,” recalls Kelly.

Unfortunately, there are no prizes on offer for guessing the scorer. But for Irish sport’s new golden girl Stephanie Roche, that particular shot may well land her one of the most prestigious prizes that can be bestowed upon a player.

On Monday, Roche will battle it out with luminaries of the international game like James Rodriguez and Robin Van Persie for the coveted Puskas, or best goal, award at FIFA’s annual Ballon d’Or ceremony in Zurich on Monday.

“At that stage we were 3-0 down. We were trying not to concede any more or maybe catch them on the hop. The management were standing on the sideline, and this goal went in, and they just said ‘sure what can you do?’,” says Kelly, who maintains a pristine recollection of that majestic moment over a year on.

It may be one of the great goals in sporting history, but Kelly’s team-mates weren’t of a mind to let her forget about it either.

“With the grainy video I thought I’d be safe enough, that no-one would really know. And then it started coming out and people started to piece two and two together and the ribbing began! But that’s all part and parcel of it I suppose.”

The footage may have been grainy, but it has since managed to attract a combined total of well over five million views. Eventually, it was to become the shot that would propel Roche towards global recognition, and may also net her a big-money move in the near future according to reports.

That said, the Youths goalkeeper harbours no ill will towards her former foe. Indeed, as with many of her fellow countrymen and women, Kelly has made ample use of the award’s online voting mechanism to help the Irish effort annex top spot.

“It’s bringing the profile of the game up which is fantastic for anyone playing. We’re probably a bit biased because she’s one of our own, but when you look at the three goals from a technical perspective, it’s by far the best of the lot,” she says.

She may have been on the wrong end of a 6-1 pummelling that day, but Kelly’s career has enjoyed a similar upward trajectory to Roche’s over the course of the intervening year, albeit in a different sport.

The former All-Star rounded off 2014 with a league and All-Ireland double, as she played a starring role in the Wexford ladies football team that swept all before it last year.

Asked if Roche’s wonder-goal acted as a bit of a lucky omen in the grand scheme of things, the veteran custodian admits that cosmic karma may have swung her way in the aftermath.

“It was I suppose. After that we went and won the national league, the cup, and then the All-Ireland junior title in September. That was 2013 she scored the goal in, so 2014’s been even better for me!”

Sonia O’Sullivan’s silver in Sydney, home workouts a boost for fitness industry
Here is your handy guide to sport on television this week

1 Barcelona in crisis as six board members resign in protest
2 My favourite sporting moment: When Ireland rocked Kingston and rolled Pakistan
3 Ireland boss Stephen Kenny: ‘I’ll do things my own way. Put it that way’
4 Andrew Conway diary: Nailing the wheelie bin challenge on the double
5 GAA to hold remote special congress to help decide fate of 2020 Championship
Real news has value SUBSCRIBE
Crossword Get access to over 6,000 interactive crosswords