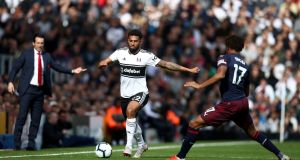 Martin O’Neill has delivered a barbed defence of Fulham’s Cyrus Christie in the face of scathing criticism by former England captain Alan Shearer on Sunday of the 26 year-old but it still looks more likely that Matt Doherty will start at wing back this weekend.

Shearer described Fulham’s defence as collectively “terrible” in his analysis on Sunday’s Match of the Day 2 in the wake of the club’s 1-5 home defeat by Arsenal but he targeted Christie for prolonged criticism over his performance in the right wing back role.

The BBC pundit said at one point that he didn’t like to single the player out but suggested that Arsenal had identified him as a weakness, a point disputed by O’Neill who felt that the former striker had misunderstood Christie’s role and let Denis Odoi, who played on the right of the defensive three, off the hook.

“When you play a wing-back role, the first thing people will now ask you is ‘what are the manager’s instructions?’” said O’Neill when asked about the incident. “They’re very important.

“Mostly now, which has changed a bit, it is that they ask the wing-backs to stay very, very high up the pitch and not worry about coming back. I’ve asked Cyrus this because the first thing I thought of when Alan Shearer was having a go was: ‘He hasn’t thought this out’.

“He should have prefaced things by saying ‘I don’t know what the manager has said’ because at the end of the day the manager has asked him to stay up the pitch and not worry about getting back. And if you are playing a three, three centre-backs, then the centre-back either side of the middle guy has got to be thinking about that space in behind the wing-back who is an attacking wing-back.

“When they’ve lost the ball, it’s played into that space. The right centre-back, he’s the first one who should be thinking about getting out there to close down and then they adjust accordingly. So if you’re asking a wing-back to go up the pitch, be really high up the pitch, hoping that you receive the ball up there and then you ask them to get 50 yards back when it’s broken down? Usain Bolt couldn’t get back there in time, he wouldn’t be able to get back, so the communication has to be there.”

O’Neill was inclined to agree, it seemed, with the wider negative assessment of the Fulham performance but, he said: “I don’t think the severe criticism (of Christie) was warranted. I don’t think everything was down to him and the first thing I thought about when Shearer was saying those things was ‘you should be asking the question’. Maybe that’s why he only managed seven games; that might be something to do with it.”

Shearer, of course, oversaw the very tail end of Newcastle’s relegation from the Premier League in 2009 with the club formally consigned to the Championship on the last day of the campaign by a 1-0 defeat at Aston Villa, then managed O’Neill.

The Irishman’s take on it is likely to be seen by Shearer as O’Neill going exceedingly easy on Christie who really didn’t seem to do well in the game. But the defender’s more immediate difficulty going into the game against Denmark is likely to be the form of Doherty who appears to have an almost unanswerable case for starting at right wing back if that fits in with the formation preferred which, the Ireland manager seems to suggest, it will be.

“I was there at Palace on Saturday and I thought Wolves were very ordinary in the first half,” says O’Neill, “I was speaking to Doherty about it. In the second half they improved and he is doing really well, really great. It’s nice to see. So if he is going to come in here you’d like things to be as comfortable for him as possible and if we make adjustments for him, so be it.

“At this moment if we do go into the wing back role he has been doing exceptionally well. And he would be comfortable with that rather than being in a normal right back role.”

Asked whether, in the event Doherty does start there, Christie might be moved to the left side – at the likely expense of Enda Stevens – the managers remarked that: “Some players have to play out of position, that’s a given. Mostly what you want, though, is players who are playing in a position at this minute at their clubs and you can adjust your side to it. I can’t make all adjustments to suit one player.”

All but one of the 26 players to survive the cut for the games trained yesterday with Shane Long absent, having tests on an ankle injury, but the striker is expected to be fit for Saturday.