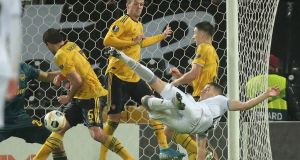 It will probably not matter to Arsenal’s Europa League campaign but they found another cruel and unusual way to self-immolate here. A largely dire performance was lit up, after a fashion, when Shkodran Mustafi headed them into an 80th-minute lead with their first effort on target but this side’s capacity to crumble after going ahead can never be underestimated. So it was that, in stoppage time, Bruno Duarte acrobatically gave Vitória Guimarães a deserved first point in Group F and the Portuguese team could even have won it after that. Arsenal require a point from their final two games in order to progress, but that was the best encouragement they could take from another shapeless day’s work.

A combination of persistent drizzle, a half-full stadium and a strangely-timed kick-off lent this tie a subdued feel at the outset. It is doubtful where a start time of 3.50pm will ever catch on but that is what those who managed to rearrange their working hours were offered, on account of nearby Braga’s home meeting with Besiktas tomorrow night and the Champions League schedule later on Wednesday.

For those of an Arsenal persuasion, there was a sense that Unai Emery had already broken the midweek’s biggest story in announcing during his pre-match press conference that Granit Xhaka would no longer be club captain. It was Rob Holding who took the armband here, with none of the freshly-depleted leadership group risked from the start.

Holding and his charges quickly found Vitória willing to get shots away in the slippery conditions. Davidson, a left-sided forward who caused plenty of problems when the sides met in London last month, was high and wide within 30 seconds but bigger scares swiftly followed.

Pêpê, the home midfielder, took aim from 25 yards and was unfortunate to see a rasping strike rebound off Emiliano Martínez’s right post. Then the former Spurs winger Marcus Edwards could not quite repeat his early goal from the match at the Emirates, trying his luck from similar range and drawing a full-stretch save from the Arsenal keeper.

A low cross from Davidson skidded beyond everybody but none of these openings held a candle to the one Edmond Tapsoba squandered in the 18th minute, when he was found unmarked by a Pêpê free-kick. The Vitória centre-back’s flicked header was parried wide by Martínez and the sense at this point was that Emery’s decision to field three centre-backs for the first time this season was doing little for Arsenal’s cohesion.

When they did establish a foothold, Holding nodded a presentable chance over the bar from a well-weighted Bukayo Saka delivery. It was Vitória, so enterprising a fortnight ago, who continued to pose the greater threat. Davidson curled wide after setting himself 16 yards out and then, with Arsenal asleep at another Pêpê set-piece, Federico Venâncio failed to test Martínez.

By half-time Arsenal had at least managed to remove some of Vitória’s sting, without showing much evidence they could apply any of their own. The home side had, in an increasingly familiar pattern, outshot them by 10 to one.

That disparity should have increased within four minutes of the restart but Edwards, sent behind Arsenal’s defence on the right, never quite looked comfortable with taking the shot on and was forced wide by some admirable tracking back from Dani Ceballos. Edwards did manage to slip the ball past Martínez and across goal, but nobody was on hand to convert and it was scrambled clear.

The next time Ceballos sought to retrieve a Vitória attack, he pulled up with what appeared to be a hamstring issue. Mattéo Guendouzi was dispatched to replace him; the Frenchman, purposeful and aggressive, dealt a little menace to Arsenal’s extended periods of possession but, bar a wayward header from Mustafi, opportunities to score were nonexistent.

By now the rain was torrential and the football increasingly tough to watch. It was getting difficult to put smooth passages of play together and Vitória, for whom victory was essential, were offering little of their earlier spark. Holding was booked after sliding into Lucas Evangelista, a collision made far worse than it ought to have been by the sodden surface. Emery introduced Alexandre Lacazette, who is still feeling his way back to full sharpness after an ankle injury, but the deadlock would be broken by a far less likely source.

Mustafi was completely alone at the far post when he met Nicolas Pépé’s free-kick, heading firmly across a static Douglas for his first goal since February. That should have been enough but then Duarte, reacting after an Edwards cross was kept alive at the far post, sparked wild celebrations. The substitute Rochinha shot just wide at the death, sparing Arsenal to some extent.

1 It’s shocking how men have driven women away from exercising in public
2 The Offload: Shane Horgan pulls no punches as the podcast wars rage on
3 Ken Early: Maradona’s wonder goal a monument to lost freedom
4 Joe Canning discharged from hospital on Sunday night
5 Ireland 23 Georgia 10: How the Irish players rated
Real news has value SUBSCRIBE
Crossword Get access to over 6,000 interactive crosswords