Koeman will be next Barcelona manager with Messi key to plans, says president 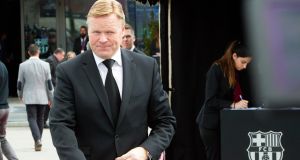 Ronald Koeman has admitted he is in talks with Barcelona to take over at the Nou Camp. Photograph: Quique Garcia/EPA

The Barcelona president, Josep Maria Bartomeu, has said Ronald Koeman will be the club’s next manager. The Dutchman arrived in the city on Tuesday, on the same day that Eric Abidal left his role as Barça sporting director by mutual consent.

“If nothing goes wrong, Koeman will be Barça’s coach next season,” Bartomeu said in an interview shown on the club’s website. We already know how he thinks and his philosophy. “We bet on him . . . he was in [Johan] Cruyff’s ‘dream team’. He was the first one we called in January. It’s a dream for him.”

Bartomeu has also moved to calm speculation over Lionel Messi’s future, which has intensified following Friday’s 8-2 Champions League defeat to Bayern Munich. “I have spoken with Koeman and the pillar of our project is Messi,” Bartomeu said. “He is number one in the world. There is no doubt that in Koeman’s new project you can count on Messi.”

Earlier on Tuesday, Abidal left his post as sporting director at the Camp Nou – just 24 hours after telling Quique Setién that he had been sacked as manager of Barcelona. The decision, presented as being by mutual consent, represents a sharp departure from the formal announcement made by Barcelona on Monday.

A statement said the club would carry out a “wide-ranging restructuring of the first team, based upon a consensus between the current technical secretariat and the new coach, who will be announced in the coming days”. But a day later, that technical secretary has gone. Meanwhile Bartomeu continues in his post, with elections not to be held until after March 15th, 2021.

According to the Spanish paper AS, Koeman discussed the Barcelona vacancy outside the Dutch Football Federation headquarters earlier in the day. Asked whether he would like to return to Barcelona, the 57-year-old reportedly said: “Yes, I’d like to, but it will only be confirmed once I have signed the contract. Until then, I cannot say any more about it – even though I’d like to.”

Barcelona will undergo dramatic cost-cutting measures aimed at saving close to €200 million and rejuvenating the squad, seeking departures for older, more expensive players. Barely a handful of footballers are considered untouchable by the club. Messi is one but his contract expires next year and there are doubts about his desire to continue. Another, Marc-André ter Stegen, is yet to renew his contract and will be out of action injured until November.

The task of leading that reconstruction will not now fall to Abidal. A former player, since rejoining the club in 2018 he has overseen a huge outlay with diminishing returns, drawing severe criticism, although real power lay in the hands of Bartomeu, not only the president but also the vice-president with responsibility for sport.

Abidal attracted criticism for his handling of the departure of Ernesto Valverde in January – the first Barcelona coach to be sacked midway through a season for 16 years – and the search for a replacement. With few candidates available, Barcelona eventually settled on Setién, having been turned down by Xavi and Koeman.

Abidal was publicly criticised by Messi after he blamed the players for Valverde’s departure and claimed that some “don’t like working”. The Frenchman’s sacking represents the fifth change made to the role of sporting director during Bartomeu’s six-year presidency. Andoni Zubizarreta was sacked at the start of 2015 as Bartomeu sought to ride out a crisis. Zubizarreta’s assistant, Carles Puyol, walked out immediately after that sacking.

Next came a committee made up of Charly Rexach, Ariedo Braida, Javi Bordas and Jordi Mestre, which was then replaced by Robert Fernández. He was subsequently joined by Pep Segura. When Fernández departed, Abidal and Ramón Planes joined Segura, who then left.

Abidal worked with Planes until his departure – the latest victim of the crisis, but almost certainly not the last. – Guardian