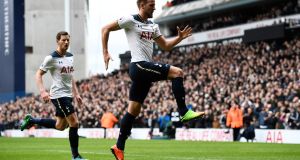 Lads, it’s Stoke City. After Thursday’s embarrassing exit from the Europa League, Tottenham Hotspur eased back into Premier League action by thrashing their most submissive opponents. Mauricio Pochettino’s team had beaten Stoke 4-0 in their two previous meetings and it took only one half for them to reach that score here, as Harry Kane struck three goals before inviting Dele Alli to hit another. If Wembley spooks Spurs, the sight of Stoke City jerseys cheers them right up.

Spurs, in fairness, have clobbered most opponents at White Hart Lane this season, their tally for the Premier League campaign now standing at 11 wins and two draws from 13 matches. But few visitors have been as obliging as Stoke, who began as if expecting another trouncing. That was a self-fulfilling attitude that made them ideal opponents for a Spurs team eager to reassert their top-team credentials after flopping out of Europe at Wembley.

The first sign of Stoke docility came in only the fourth minute, when Christian Eriksen nutmegged Ryan Shawcross in the box and rolled the ball across the face of goal. Fortunately for Stoke there was no Tottenham player there to complete a tap-in, but it was not long before Spurs players were infiltrating the Stoke box in swarms. Shawcross, for years the most formidable of sentinels for Stoke, was particularly discombobulated and Spurs’ opening goal was a result of his confusion. As the centre-back tried to tidy up following another incursion by Eriksen in the 14th minute, Kane nicked the ball off him and lashed a low shot into the net from 15 yards.

Stoke attempted to stammer a retort and, in fairness, presented a cogent argument in the 24th minute in the form of a flowing move down the left involving Ramadan Sobhi and Erik Pieters. Peter Crouch nearly topped that off with a telling finish from four yards but Hugo Lloris had the last word with a superb save. Then Spurs settled the debate for good.

Jan Vertonghen fired a shot off the crossbar following a corner by Eriksen. Moments later Kane was more clinical. His second goal came courtesy of a perfectly executed half-volley from the edge of the area following an outswinging corner by Eriksen. The striker raised his left-leg with the grace of a ballerina and then brought it cracking down like a lion tamer’s whip as he sent a fierce and impeccably controlled low shot into the net.

Kane completed his hat-trick five minutes later, this time with Lady Luck joining Eriksen on assist duty. The Dane rolled a free-kick to the striker, whose low shot from nearly 30 yards seemed unlikely to worry Lee Grant until it deflected of Crouch and carried on past the nonplussed goalkeeper and into the net.

Kane may have had a hat-trick under his belt but he continued to contribute to Stoke’s debagging. He embarrassed Bruno Martins Indi with a cheeky piece of skill before racing towards the box in time added on at the end of the first half. Instead of shooting he lured Grant off the line and then presented Alli with the easy task of stroking the ball into the empty net.

Stoke, seemingly dazed by Spurs’ speed and movement, looked like they could do with a break, and perhaps a lie down.

Stoke knew the match was beyond them but attempted to restore a measure of dignity in the second half, or at least preserve the ruins of it. Preservation was the name of Pochettino’s game in the 48th minute when he withdrew Toby Alderweireld, who seemed to suffer a slight strain. Tottenham remained on top throughout the second half but did not over-exert themselves for the sake of a fifth goal, especially after Kane collided with a post while attempting to convert a header. Alli tried to double his own score in 89th minute but flicked a shot just wide from six yards after a nice exchange of passes.

The win lifted Spurs back to within 10 points of league leaders Chelsea, whom they would be confident of overhauling if they could play Stoke every week.