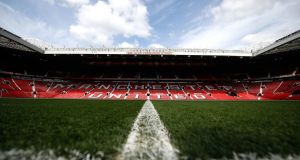 Premier League clubs will be briefed on Project Restart at a separate meeting on Friday. Photo: Martin Rickett/PA Wire

The prospects of sport being given approval on Friday to restart behind closed doors when it meets the Department for Digital, Culture, Media and Sport and Public Health England have been heavily played down – with those involved in the talks saying any such move is at least a week away.

It is understood that any potential relaxations for the Premier League, horse racing, cricket and rugby – all of whose representatives will be involved in the conference call on Friday – will not come until the government has announced on May 7th its broader plans to ease Britain’s lockdown status.

Instead the meeting is likely to focus on proposals from two working groups, which have separately looked at when it might be safe for sport to return to full training, and the rules that need to be in place for competitions to be played behind closed doors.

The Premier League, which is holding a separate conference call with its clubs on Friday morning, also does not expect to hold a vote on its next formal move regarding the response to coronavirus before May 7th. However, clubs will be briefed on aspects of its Project Restart, including plans for testing and the possibility of games being played on neutral territory.

While the best-case scenario of the football season being resumed in June has been modelled, the Premier League’s cautious stance reflects a reluctance to rush back.

The Bundesliga intends to resume its 2019-20 season on May 9th, but it has been noted by the Premier League that the date is no longer certain given Germany’s chancellor, Angela Merkel, has suggested tighter restrictions may have to be implemented because of concerns that cases of the virus could multiply again.

Meanwhile Uefa’s medical chief professor, Tim Meyer, has said it is “definitely possible” to plan for the 2019-20 season to restart, despite France’s Ligue 1 becoming the second major European league to be cancelled after the Dutch Eredivisie.

Speaking a day after Fifa’s medical chief, Michel D’Hooghe, warned it would not be possible to play football before social contact was permitted – and that September was a realistic target – Meyer sounded a more optimistic note.

“All football organisations which are planning the restart of their competitions will produce comprehensive protocols to ensure that the health of those involved in the games is protected,” he said. “Under these conditions, it is definitely possible to plan the restart of competitions suspended during the 2019-20 season.” – Guardian