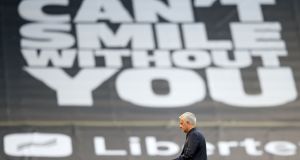 Spurs manager José Mourinho walking off the pitch after his team’s defeat at home to Everton. Photograph: Alex Pantling/AFP

It took about 10 minutes for the shine to go off the new season for Spurs. Everton midfielders who had only been introduced to each other last week were dominating the ball as though they had been playing together for years. Tottenham, most of whose players really have been playing together for years, looked as though they had no idea how to get the ball back.

At the end, as Everton congratulated each other on a well-deserved win, their first against Spurs since David Moyes was their manager, the Sky presenter David Jones suggested that it would be fascinating to be a fly on the wall of the Tottenham dressing room for the post-match debrief.

1 Graham Norton: ‘I wanted out, out, out of Ireland’
2 Covid-19: Seventy cases in Cork traced to local pubs and restaurants in recent weeks
3 Speed and distance Covid-19 droplets travel tracked by researchers in Mater hospital test
4 Olivia O’Leary: If you move to Carlow, there are things you’ll have to get used to
5 Eighteen revelations from a trove of Trump tax records
6 More than 30 people queue overnight to secure property in Carlow
7 Hello Eir, is anybody there? Four unhappy customers complain
8 The Irish Times view on Donald Trump’s taxes: an overdue lifting of the veil
9 ‘I never suspected that, aged 29, I’d be lost’
10 Susie Dent: ‘Jimmy Carr is incredibly rude to me. I took it as a compliment’
11 Three Ireland switches on 5G network around the country
12 Donald Trump's taxes: US president paid $750 federal income tax the year he won the election
13 Covid-19: Possible extra restrictions for four counties to be decided by weekend
14 Nurse who falsified prescriptions is struck off register by High Court
15 Ken Early: Handball ‘crisis’ a timely distraction from the grim bigger picture
16 Bus Éireann to shut many inter-city routes due to financial pressures
17 My cancer scare, the marathon and me
18 Gardaí seeking to track movements of man (48) prior to unexplained death
19 Donald Trump’s Irish and Scottish golf courses ‘reported losses of $63.6m’
20 There’s something grotesque about council’s plan to destroy historic horse yard for hotel
21 Large sections of Garda to be disarmed following review
22 Liverpool maintain perfect start with win over Arsenal
23 High Court approves ECT treatment for elderly priest
24 Over 10,000 more people on pandemic unemployment payment in past week
25 Ex-minister Michael D’Arcy failed to alert ethics group on post
26 Trump and Biden prepare to face off in first presidential debate
27 Joaquin Phoenix and Rooney Mara name their baby son River
28 Claire Byrne: ‘My parents had to stand by the bed while I got the last rites’
29 TDs and councillors say local Covid restrictions should be considered
30 Positive omens for Kenny ahead of Ireland’s Slovakia clash
31 Ireland’s travel green list reduces to four countries
32 Third level students urged to consider if they need rented accommodation
33 Am I paying too much for my buy-to-let mortgage?
34 The Offload: Springbok heavyweights heading for Pro14
35 City council to investigate Central Bank’s bird scaring device
36 Gardaí want to talk to three males over alleged rape in Mayo
37 Mortgage breaks will not be extended beyond this week
38 Northern Ireland reports 220 new cases of Covid-19
39 Are you a non-lying cheat or just radically dishonest?
40 UCD professor asked to resign from EU committee over Covid-19 claims
Real news has value SUBSCRIBE