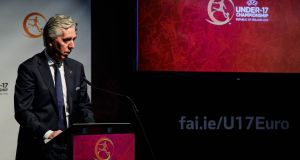 The FAI may have subsidised John Delaney’s lavish lifestyle and efforts to fend off press interest in his activities to the tune of three quarters of a million but it is the much smaller payments recorded as having been made to his former girlfriend, Susan Keegan, which are likely to be central to any potential prosecution of the association’s former chief executive.

The Dubliner, who now lives in Spain, has acknowledged receiving just €10,000 of that and the report, by Newry-based accountancy firm Kosi, found that substantial amounts ostensibly paid to her quickly found their way into Delaney’s personal bank account.

The bulk of the payments were made at the end of 2013 and start of 2014, shortly after the association had secured a substantial write down of its stadium-related debt following the exit from the Irish market of its original lender for the redevelopment of Lansdowne Road, Danske Bank.

An American firm Kohlberg Kravis Roberts (KKR) took over the debt at the end of 2013. The full extent of the discount it obtained on the amount outstanding, which was around €60 million at the time, was never revealed but the FAI received a €12 million reduction, something Delaney claimed might lead to a saving of €20 million in capital and interest.

The latter was high under the terms of the new deal, however, and the deal was only ever seen as a relatively short-term arrangement which would, in turn, be replaced by a loan from a more mainstream lender, something that was ultimately achieved with the switch to Bank of Ireland in 2016.

Delaney, though, is understood to have sought board approval for a substantial bonus from the association’s board for his part in securing the saving offered by the original KKR.

A former board member says that he felt he was entitled to the payment for what he regarded as his part in securing the write down and was deeply disappointed when he was, it is said, told that there was no scope to pay a bonus given the scale of his existing remuneration.

Publicly, that was put at €360,000 although it was confirmed last year that the association was also paying the rent on his home and huge expenses. Kosi found that even after some of this money had been repaid, the association had provided Delaney with “excess benefit” to the value of €725,000.

In their book, Champagne Football, which is to be published this week, the Sunday Times journalists, Mark Tighe and Paul Rowan, who broke a series of stories in this area, put the amount withdrawn in cash from ATMs by Delaney at €50,000 and suggest that his FAI credit card was used to pay for jewellery, limousines and hotels. More than €500,000 is also reported to have spent on his personal legal costs, much of it in relation to libel actions.

These arrangements had serious consequences for the association, contributing to its need to make a settlement with Revenue for €2.7 million in 2019.

It is understood that the detail of the payments to Keegan were really only examined around that time when then president Donal Conway and then director of finance, Alex O’Connell, sought to untangle some of the specific financial issues around Delaney’s dealings with his former employer in the wake of initial revelations.

The pair are believed to have found that a cheque made out to Keegan for €25,000 was lodged to Delaney’s account and that an invoice, purportedly from Keegan for €35,000 was effectively generated within the association’s own system. The Sunday Times have reported that it was created by a Microsoft Office account registered to JDelaney@fai.ie.

Some of the money is said to have been justified on the basis of a claim that Keegan had acted as a match agent, helping to facilitate the arrangement of two high-profile friendly games against England. Keegan has never claimed that she performed that role and has denied getting the money.

Then FAI director of finance Tony Dignam says that they were approved by Delaney and “a number of senior members of the board”. Dignam previously told The Irish Times that he sought to raise a number of financial concerns during his time with the association but that he was rebuffed by “a clique within the board”. He suggested that Michael Cody was a key figure when it came to the consideration of sensitive financial matters.

“I highlighted my concerns to John Delaney, Eddie Murray and Michael Cody, which was the process for me if I had issues or concerns,” he said of his time at the association in general. “I also brought my concerns to many of the other board members but nobody wanted to know.”

“They [those in effective control] did what they saw fit and in the end I felt there was nothing I could do to change that.”

Huge amounts of money at the association was clearly misspent in the years that followed but the payments ostensibly made to Keegan may still prove critical to whether the investigation initiated by the Office of the Director of Corporate Enforcement ends in a criminal prosecution.

A large amount of material, comprising 13 hard copy documents and a digital device containing 270,000 separate files including Delaney’s emails, was seized from the FAI’s offices at Abbottstown under a search warrant in February.

The former CEO was to given until July to establish which of those documents he believed to be personal or covered by legal privilege but then sought additional time and he was instructed to provide the ODCE with a list by this month so that the High Court can make a determination in the matter.

Diminished Dele Alli shows the gulf between talent and expectation 09:00
Can Thiago bring the right dynamics to save Liverpool from entropy? 09:00
Sam Bennett: ‘A green jersey in the Tour de France is such a highlight of my career’ 07:30
If soul-searching was a sport, today’s GAA teams would all be champions 06:00
Matt Williams: The sky is not falling in on Irish rugby - but Ireland do need a new plan 06:00

1 Kevin Babington: Learning to live again after life changed forever on Long Island
2 Can Thiago bring the right dynamics to save Liverpool from entropy?
3 Diminished Dele Alli shows the gulf between talent and expectation
4 Matt Williams: The sky is not falling in on Irish rugby - but Ireland do need a new plan
5 Sam Bennett: ‘A green jersey in the Tour de France is such a highlight of my career’
Real news has value SUBSCRIBE
Crossword Get access to over 6,000 interactive crosswords