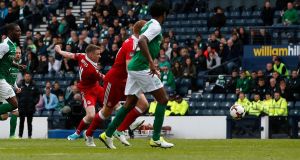 Republic of Ireland winger Jonny Hayes proved the hero for Aberdeen as they beat reigning champions Hibernian in their Scottish Cup semi-final at Hampden Park on Saturday.

The 29-year-old late strike took a a big deflection off Hibernian’s Darren McGregor on the way to the back of the net as the Dons earned a place in the decider against either Celtic or Rangers.

Dubliner Adam Rooney scored after 13 seconds to send Aberdeen on their way and went two ahead in the 24th minute thanks to a brilliant free-kick from Ryan Christie.

Hibs, fresh from clinching the Championship title, had got back in the game thanks to an inspired first-half substitution. Replacement Grant Holt headed them back in it and then set up Dylan McGeouch’s equaliser on the hour mark.

It took a large slice of fortune to decide the tie in the 85th minute. Hayes turned away from Marvin Bartley and fired a long-range shot which initially looked harmless, but cannoned off McGregor’s knee and spun inside the post as stranded goalkeeper Ofir Marciano looked on.

Hibs threw men forward and Marciano incredibly almost equalised deep into stoppage time but opposite number Joe Lewis produced an acrobatic save from his header following a corner.

Aberdeen got off to their flying start despite Hibernian kicking off and winning possession back. Several Dons players swarmed round John McGinn in the centre circle but Bartley won the ball back. However, McGregor sold fellow centre back Efe Ambrose short with a square pass and Rooney pounced before lifting the ball over the dive of Marciano.

Hibs struggled to regain their composure and Aberdeen went two ahead after an ingenious free-kick. Fraser Fyvie was booked for scything down Kenny McLean wide on the right after a one-two with Christie, who had kept his place in the team despite Niall McGinn being passed fit to start on the bench following a groin injury.

The on-loan Celtic player repaid manager Derek McInnes’s faith. He spotted an inviting gap and curled a left-footed shot inside the near post with Israel goalkeeper Marciano only able to help the ball in the net from behind the line.

Hayes fired just wide from inside the box as Aberdeen continued to look threatening.

Hibs head coach Neil Lennon had seen enough by the 34th minute and brought on striker Holt for midfielder Fyvie, who trudged off unhappily and threw a tracksuit top to the floor. But the former Aberdeen player could have had little complaint about the change two minutes later.

Martin Boyle took the initiative with a positive run and delivered a teasing back-post cross which Holt headed back across goal and into the net.

Hibs maintained the pressure until half-time and the second half started in exciting fashion with both teams getting space to attack each other.

Aberdeen right back Shay Logan fired just wide from long range before McInnes made a tactical switch in the 59th minute, bringing on Anthony O’Connor to form a three-man central defence.

It was breached inside 60 seconds. McGeouch ran at the Dons and collected a deft return pass from Holt, which took out Ash Taylor in the inside left channel, before drilling the ball home.

Lennon sprinted to the corner flag in front of the Hibs fans to celebrate but he was soon forced into a change as McGeouch limped off for Andrew Shinnie, who lined up against his brother and former Inverness team-mate Graeme for the first time in a competitive match.

Hayes and Aberdeen’s Shinnie both had long-range strikes held before McInnes reverted to a flat back four with the introduction of McGinn for Mark Reynolds, who lasted 69 minutes on his comeback from hernia surgery.

The tie was evenly balanced and appeared to be heading for extra-time until Hayes’s deflected strike, and Aberdeen survived some late pressure to reach their second final of the season, where they will face either Celtic or Rangers.

1 Born to ride, born to win: Sam Bennett, the making of a green machine
2 Tottenham offer out of favour Dele Alli to PSG
3 Next stop the Champs-Elysées in green for Sam Bennett
4 Ulster’s European dream clinically crushed by Toulouse
5 Keith Duggan: Surreal story of John Delaney needs to act as a wake-up call for FAI
Real news has value SUBSCRIBE
Crossword Get access to over 6,000 interactive crosswords