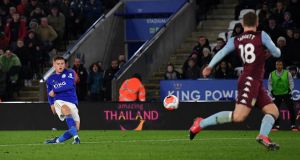 If Leicester end up qualifying for the Champions League next season then Brendan Rodgers may be tempted to send his regards to Pepe Reina.

The Aston Villa goalkeeper fell out spectacularly with Rodgers when he took over at Liverpool before being shown the door, but it was the veteran’s rush of blood to the head just before half-time that gifted his former manager a first league victory since the end of January.

A second-half double from Jamie Vardy after he came off the bench and a second goal for the superb Harvey Barnes wrapped up victory for the home side as Villa’s Dean Smith cut a disconsolate figure at full-time.

There had been a sense of urgency among home fans before kick-off having seen their cushion over the chasing pack whittled down to just five points following Manchester United’s derby victory on Sunday.

“You want hear that special music next season, don’t you?” asked the stadium announcer in reference to the competition they contested in 2017 – reaching the quarter-finals – as he attempted to whip up the atmosphere on a miserable evening in the east Midlands.

Yet with Vardy only deemed fit enough for a place on the bench after a calf injury as Rodgers made two changes from the team which edged past Birmingham in the FA Cup last week, they could have been forgiven for fearing the worst against opponents who had already denied Leicester a place in the Carabao Cup final.

Villa’s last-gasp home victory in the second leg of the semi-final at the end of January preceded a run of four successive defeats of their own which culminated in their valiant loss to Manchester City at Wembley, during which time they have seen their relegation rivals steal a march on them. Smith also made two changes, restoring Reina in goal, with Ireland midfielder Conor Hourihane replacing Anwar El Ghazi.

The visitors should really have taken the lead inside the first 10 minutes but neither Hourihane nor Mbwana Samatta were alert enough to take chances provided by the dazzling feet of Jack Grealish. Villa’s talisman was up against a direct rival for a place in England’s squad for Euro 2020 in James Maddison, with the Villa manager suggesting before the match that Grealish and the former Coventry youth team player could even play together in the same team.

Maddison responded to the cat-calls from the visiting fans as he prepared to take Leicester’s first corner by delivering a perfect cross that was met by the head of Jonny Evans. Reina came to Villa’s rescue with an instinctive save, although Evans should have gone for goal again with the follow-up rather than pick out Barnes to head over.

Caglar Soyuncu wasted another brilliant corner from Maddison before the referee waved away appeals for a penalty after Frédéric Guilbert was adjudged to have played the ball fractionally before fouling Ricardo Pereira.

But the miss of the half was reserved for Kelechi Iheanacho, who followed up a disappointing individual display in the defeat to Norwich by heading wide when it seemed easier to score from Pereira’s glorious deep cross after a short corner. Down on the touchline, Rodgers was not amused.

But it was soon Smith’s turn to kick the ground in frustration as Reina charged out of his goal in an attempt to intercept Marc Albrighton’s speculative long ball ahead of Barnes only to see the Leicester winger easily win the race before taking his chance with aplomb.

The former Spain goalkeeper’s heart must have been in his mouth again two minutes after the restart as his clearance was headed into the onrushing Iheanacho’s path by the impressive James Justin, although this time the 37-year-old stayed on his line and was able to make a comfortable save.

Villa had mustered no shots on target during the first half and appeared no closer to threatening Kasper Schmeichel’s goal after the interval, despite Grealish’s prompting.

Vardy’s introduction just before the hour mark to replace Iheanacho was greeted with a roar almost as loud as the opening goal and it did not take long for him to make his presence felt. Lurking at the back post to convert a cross from Barnes, the ball was diverted out of his path by the shoulder of Tyrone Mings and the referee pointed immediately to the penalty spot. Vardy did not make the cleanest connection but it was enough to beat Reina and give Leicester the cushion they craved.

His second was another moment Reina will not want to see again as Vardy lashed the ball home at the far post after Villa had once again failed to clear from a Barnes through-ball. And the 22-year-old youth team product rounded things off with sharp finish from Albrighton’s cross five minutes from time to complete a miserable night for Smith’s side. “Going down, going down, going down,” sang the Leicester fans. On this evidence, it is hard to disagree. – Guardian