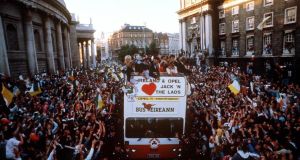 “We want Jack!” roared the enormous crowd. They had sweated in the June heat for hours and it wasn’t to see preening ministers and councillors. 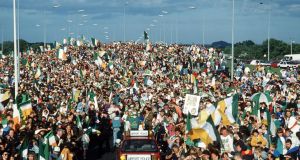 The road opened out onto the dual-carriageway to reveal the breathtaking sight of hordes of spectators completely covering the large Swords roundabout. 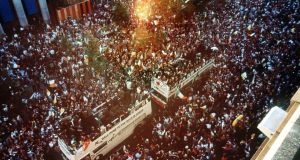 It was past 9pm when the convoy reached O’Connell Street, the crash barriers proving next to useless as fans surged towards the buses.

Yes we all partied.

Excessively, some may have said.

Lost the run of ourselves and celebrated too much, according to others.

The entire country was high as a kite.

And still a few years to go before the accursed Celtic Tiger loped into town licking its lips and dazzled an idiot class of self-regarders into bankrupting the place.

These were the happy days when the only outfit being run into the ground was our tireless football team.

So we didn’t win the World Cup at the first attempt.

But we were there and that was more than enough reason to go wild and break out the bunting.

Thousands of supporters travelled to Italy for the matches, but their epic adventure was experienced with equal fervour by the keyed up fans left behind growing more hysterical by the day.

It was the best of fun.

Somehow, we survived the group stage – a monumental achievement – and reached the second round.

If it was hot in Genoa on that Monday in June, it was boiling back home. Pubs were jammed for the late afternoon kick-off against Romania. It was heartstopping stuff. When the match went to penalties we watched, in a jittery fug of smoke, sweat and smashed glasses, as much as our frazzled nerves would allow.

Then Packie saved and O’Leary followed up immediately with the winner, sparking an unforgettable pandemonium . Crowds belted on to the streets, singing and crying and bursting with pride and porter.

The madness didn’t let up all week until it was time for Rome’s Stade Olympico and a Saturday night date with Italy. When it got worse.

Imagine. The World Cup quarter-finals. The entire country went pure daft with the joy and excitement of it all.

On the night, a single goal from Toto Schillaci ended Ireland’s World Cup odyssey. But what the hell. What a journey it had been.

On the domestic front, morale soared.

We were all part of Jackie’s Army.

For the last hurrah, this collective euphoria was channelled into one crowning, extraordinary event – the homecoming.

Estimating the size of the crowd was difficult (the Garda declined to give a figure because the sheer volume of people defeated their counting system), but it was reckoned that nearly three-quarter of a million people turned out to welcome home the heroes.

On the day, Aer Rianta asked supporters not to come to the airport as there wasn’t enough space in the complex. This instruction was spectacularly ignored.

Flight EI 4501 was due in around teatime. The advance guard from Jack’s Army began arriving at 7am. By the time the plane (rechristened St Jack for the occasion) landed, over 50,000 fans were crammed in and around Dublin airport.

Sunday, July 1st, was a busy day on the ceremonial front in the capital city, with two important flights due in. Nelson Mandela, globally feted and all as he was, must have been rather gratified when he stepped out of his plane in Ireland to be met by a solid wall of Tricolour-waving admirers as far as the eye could see.

The football supporters – along with a couple of thousand who were actually there to cheer Mandela’s lunchtime arrival – cheered him through Arrivals.

They had to wait many more hours before the team touched down.

Charlton emerged first, standing at the top of the steps, holding a fishing rod given to him by the pilot, staring in disbelief at the scene, close to tears.

Flag-waving, delirious fans everywhere – steaming up the windows in the terminal building, waving from the roof, wedged into every ledge and nook, lining the four tiers of the multi-storey carpark and spilling into the overflow areas down below.

Amid chaotic scenes on the tarmac, then taoiseach Charlie Haughey and half his ministers lined up to greet the team. After speeches which nobody could hear and music from the Army Band, everyone scrambled for the open-top buses.

It’s normally just a few minutes’ drive from the airport to the main road. On this astonishing night, it took almost an hour to complete the course. The motorcade inched along through cheering crowds, 20 deep and more on either side of the vehicle. The road opened out onto the dual-carriageway to reveal the breathtaking sight of hordes of spectators completely covering the large Swords roundabout.

Tears to go with the singing

Defensive hard men like Mick McCarthy and Kevin Moran were crying – there were a lot of tears to go with the singing and the laughter on that bus. The sheer emotion of it all was hard to take-in.

People held up homemade banners which simply said “Thank You.”

Between the stops and the starts, Big Jack told the fans to be careful, not to come to any harm. He called out to a young lad in a wheelchair. The boy, wearing his Ireland jersey, smiled and laughed up at the manager, his mam holding up his arm and waving it for him. Charlton waved back, then turned and wiped away a tear.

Whitehall was impassable. Progress came to a standstill. Players blew kisses and conducted the crowd in a singsong while gardaí produced cutting equipment and cut through the barrier on the central median. The buses mounted the kerb, drove up and over it and continued into the city on the wrong side of the road.

Outside the gates of the Bishop’s Palace in Drumcondra, Dr Desmond Connell stood and waved, an anonymous figure amid all the excitement.

It was past 9pm when the convoy reached O’Connell Street, the crash barriers proving next to useless as fans surged towards the buses. Old and young, they came to pay tribute wearing their green white and orange.

They sang from the treetops – literally – and from the statues and the traffic lights and the bus stops; anything that could be climbed was colonised.

Despite the unprecedented numbers on the streets, the mood was good humoured throughout, with few incidents reported.

A young garda stationed in the Bridewell was taken to hospital after he was hit on the head with a hunting horn. He got three stitches. “We don’t know whether it was accidental or deliberate” said a Garda spokesman.

Finally, over three hours after they left the airport, the team reached the Bank of Ireland in College Green for their civic reception.

“We want Jack!” roared the enormous crowd. They had sweated in the June heat for hours and it wasn’t to see preening ministers and councillors.

Champions of the world

Minister for sport Frank Fahy lost the run of himself and declared that Ireland were champions of the world. “Last night in Rome, Ireland won the World Cup,” he gurgled.

Charlton and his overwhelmed squad were given a rapturous reception when the politicians eventually gave way.

“You are wonderful, wonderful supporters and a credit to Ireland” Jack told the elated spectators.

Then the lads brought the tumultuous outpouring of celebration to a close with one last chorus of Molly Malone.

A special night to round off a special three weeks.

We didn’t win. We didn’t care.

Yes, we all partied.

And proud of it.