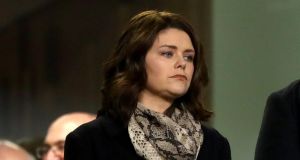 Interim FAI chief executive Rea Walshe will be part of the governance review committee looking into how the association can be reformed. Photograph: James Crombie/Inpho

Interim FAI chief executive Rea Walshe and current board member Niamh O’Donoghue are to be part of the five-person governance review committee which has been set a target of June 21st to come up with recommendations on how the running of the association is to be substantially reformed.

The aim is for the committee to have its report completed by then so that recommendations can be put before the organisation’s AGM in Navan in late July. Former chief executive Brendan Menton has described that timeframe as “totally unrealistic”.

Membership of the committee will be completed by three Sport Ireland nominees. As previously announced Aidan Horan, a director of the Institute for Public Administration and specialist in corporate governance is to serve as chair the panel, which will also include former banker Joe O’Leary, a founding partner at BMOL Chartered Accountants and Dr Moling Ryan, a longtime CEO of the Legal Aid Board and, for a shorter spell, the Irish Museum of Modern Art.

None of the supplied biographies of the Sport Ireland nominees provide any indication of significant experience in, or of, sports administration.

The committee is said to have been given a wide-ranging brief to review the governance structures at the association and recommend whatever changes it sees fit. In an outline of the process issued by the association on behalf of both organisations, it is said that the association will liaise with Uefa to ensure that any changes proposed are consistent with its recommended best practice.

Menton has recommended that the association here approach Fifa and request that it play a major part in the process of reform but there is no suggestion that that course of action has been seriously considered.

Among the sources the committee is going to draw from, it seems, is the “Stakeholder Forum,” which, the association says, is to be convened by the Minister for Sport, Shane Ross. Beyond that, it seems, it is largely free to seek the views of whoever it deems appropriate.

In a statement, FAI president Donal Conway said: “We are determined to rebuild the Association and ensure that we are fit for purpose as a modern and dynamic governing body for the biggest sport in the country.

“Working closely with UEFA and Sport Ireland, we are committed to delivering on our promise to reform the FAI and we believe this Governance Review Group can establish the foundation for change before the Board resigns at the AGM in July.”

It was inevitable that the association would nominate a couple of familiar names to the committee but there are still bound to be reservations about the two it has put forward, with Walshe having been a senior administrator and legal officer during the period in which the current issues came to a head, while O’Donoghue, a board member since the summer of 2017, first joined the organisation’s Council in 1991.

The FAI, meanwhile, has been fined €10,000 by Uefa as a result of the protest by fans at the home game against Georgia which was briefly disrupted when tennis balls were thrown onto the pitch.

Montenegro are to be made play their next home qualifier at home behind closed doors as a result of the racist abuse that some of the England players were subjected to in Podgorica.