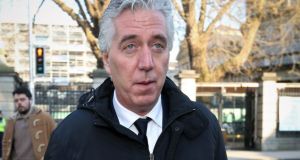 March 2005: Having seen off a couple of rivals and already generated a controversy or two as treasurer of the association, John Delaney is appointed Football Association of Ireland (FAI) CEO on a permanent basis, having taken full advantage of an interim spell in the role.

September 2008: Launches the Vantage Club, premium seat, ticket scheme. He says it will pay the association’s share of the cost of redeveloping Lansdowne Road and then keep the organisation in clover. It is massively overpriced and fails . . . terribly.

November 2009: A poor refereeing decision contributes to Ireland’s exit from the World Cup playoffs so Delaney suggests to Sepp Blatter that Ireland be the 33rd country in South Africa. Blatter laughs, then effectively gives the FAI €5 million to go away.

November 2014: Delaney entertains a crowd that includes former international players with a song about an IRA hunger striker during a late night session after an Ireland game. After a video emerges, the FAI says it is not him and threatens to sue anyone who says it is.

June 2015: Some 18,000 programmes are pulped because, a week after the whole €5 million Fifa yarn emerges, Delaney’s notes contain an attack on Blatter’s corrupt ways at Fifa. The association’s communications department says he didn’t even know about it.

July 2018: Having apparently had to borrow €100,000, it says, from Delaney, the previous April then pay it back in June, the association publishes accounts that contain no reference to the transaction.

March 16th, 2019: Delaney seeks a High Court injunction to stop The Sunday Times publishing details of a €100,000 cheque wrote to the association in 2017.

He claimed details of the cheque could only have come from family court proceedings and should not be published. Judge Anthony Barr refused to grant an injunction. On the night of March 16th, Delaney issued a statement describing the €100,000 payment as a short-term loan to aid the association because of a cash flow problem. The statement says the loan was paid back in full in June 2017.

March 17th: The Sunday Times publishes details of the cheque. The FAI issues a more detailed statement in response saying it has undertaken a governance review which included changes to the FAI board structure.

March 19th: Sport Ireland, which provides €2.7 million in funding to the FAI every year, requests urgent clarification from the board of the FAI about the loan and its repayment. Sport Ireland noted it had not been informed of the FAI’s precarious financial position as it should have been.

March 23rd: Ireland beat Gibraltar 1-0 away from home in their first match in the Euro 2020 qualification campaign. Immediately afterwards, the FAI issues a statement revealing Delaney has stepped down as chief executive and has been appointed as executive vice-president of the Association with responsibility for dealing with Uefa and Fifa.

March 24th: The Sunday Times publishes further details about Delaney’s remuneration package. Along with earning €360,000 a year, the FAI paid his €3,000 monthly rent over a long period of time. The FAI announces that Delaney’s new position will pay a lot less than his previous one.

March 26th: Irish fans voice their disapproval of what is happening in the FAI by throwing tennis balls on to the pitch during the Euro2020 qualifier at the Aviva Stadium between Ireland and Georgia.

April 3rd: Sport Ireland chief executive John Treacy appears in front of the Oireachtas Committee on Tourism, Transport and Sport. He is not impressed by the failure of the FAI to issue an explanation for the €100,000 loan. He declines to voice confidence in the board of the FAI on three different occasions.

April 8th: The FAI admits to misleading statements about €100,000 ‘loan’ and said comments it made did not accurately reflect the board’s level of awareness. The association says it has accountancy firm Grant Thornton onsite to review its “books, records and ledgers”.

April 10th: Extraordinary scenes at the Oireachtas Committee on Sport as John Delaney reads a prepared statement and then refuses to answer any questions about the €100,000 cheque or his 13 years as FAI chief executive.

The association’s honorary treasurer Eddie Murray states that the FAI has only one bank account. It subsequently emerges the FAI has 24. Committee chair Fergus O’Dowd calls on Delaney and the rest of the FAI board to step down.

April 12th: Talks begin in the FAI over the loan controversy and Delaney’s future with the organisation. The FAI’s chief sponsor says it regards good corporate governance as being of the “upmost importance”.

April 13th: A friend of Delaney claims he has offered to step down from the FAI but will continue his Uefa role. It is understood this offer to step down will be considered by the FAI board on Monday.

April 14th: The Sunday Times reports on Delaney’s spending on his work credit card in the final six months of 2016.

April 15th: Amid a growing sense of crisis around the association, Delaney goes on “gardening leave” – on full pay – while a number of investigations proceed at Abbotstown.

July 27th: The bulk of the association’s old board is replaced at its AGM although former Delaney ally, Donal Conway, stays on as president.

September 28th: Conway and new vice-president, Paul Cooke, a long-time critic of Delaney’s, lead the FAI’s side of negotiations which produce a deal that leads to the former CEO’s resignation after 15 years as its dominant figure.

1 Leo Cullen says rotation will be key as Leinster look to keep on winning
2 GAA playing the long game as they await loosening of spectator restrictions
3 Paul Stirling’s heart over head decision to play on for Ireland bears fruit
4 Owens’s comments increase tensions ahead of FAI senior council meeting
5 Harding Park, named after a lousy US president who never stepped foot on it
Real news has value SUBSCRIBE
Crossword Get access to over 6,000 interactive crosswords