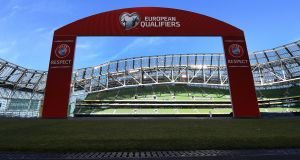 Uefa received more than 300,000 applications from 109 countries for Euro 2020 tickets within the first hour of the sales process starting, European football’s governing body has announced.

Tickets for next summer’s tournament, which is being held across 12 host cities in 12 countries to celebrate its 60th anniversary, went on sale online on Wednesday, a year before the tournament is set to start.

There are a record three million tickets available and almost 2.5 million of those will be reserved for fans of the participating teams and general public.

Applications for tickets in this first phase of sales will be open for a month until July 12th and, where demand exceeds supply, they will be allocated in what Uefa has described as a “fair and transparent draw”.

The Aviva stadium in Dublin will host three group games and a round of 16 encounter.

The 12 host cities have been divided into two clusters to reflect the purchasing power of fans in those countries, with Dublin, Glasgow and London in the cluster A. Tickets for cluster A matches start at €50, with cluster B tickets – Baku, Bucharest and Budapest – available from €30.

Overall, one million tickets will be available for €50 or less across the group stage and round-of-16 games, and there will be 40,000 tickets priced under €100 for the semi-finals and final at Wembley.

Fans who fail to get any tickets in the initial lottery will get the first chance to apply for any tickets that become available again on account of unsuccessful payments or returns.