Joanne O’Riordan: Sit back and enjoy a riveting World Cup 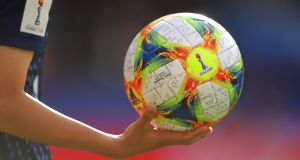 A view of a match ball during the game between Argentina and Japan in Paris. Photo: Richard Heathcote/Getty Images

As the summer breaks in Ireland (and the rain continues to fall!) a sports journalist’s nightmare emerges . . . this time of year is absolutely littered with tournaments and events to follow. From golf to GAA, cricket to soccer and of course, the Women’s World Cup

There is no better time to be alive than during an international tournament. I’ve written before about my World Cup guide to not fighting with your family (it inevitably happens during a tournament), the newfound love I had when watching the Winter Paralympics and how, in general, I can cancel the dreadful plans I had to hang out with family members who all seem to ask the same tiring questions right after graduating college.

This time, I’m all over the FIFA Women’s World Cup, and I’ve dragged friends into organising sweepstakes to give it an extra edge. I don’t care if they’re asking me non-stop about such and such a country, my general excitement comes from hearing them talk about women in sport. Even my brother wanted to see more ads of ‘golazos’ from various female players.

The eighth Fifa World Cup kicked off last Friday, but not without controversy. The world’s best footballer has refused to play to highlight issues women’s teams face and to show her national association that their disregard of the women’s team is no longer tolerable.

People have discussed Ada Hegerberg at length. Norwegian male sensation Martin Ødegaard is one of many people who has criticised her and what many perceive as attention seeking, while others have criticised her for not being clear on her stance.

If you’re not up to speed with what’s going on, think of it as Saipan 2.0. Whatever your stance was back in 2002, chances are the Norwegians have theories, explanations and a lot of discourse around their star player.

Just like 2002, the show must go on. Favourites USA were late starters as they hammered Thailand by a record margin on Tuesday night, Australia lost to Italy (a tad bit ironic after the Australian FA wouldn’t allow players to play in the Serie A as the league wasn’t competitive), European champions the Netherlands struggled to get past up-and-coming New Zealand while France emphatically started the tournament beating South Korea 4-0.

Germany had an outrageously tough time against China but teenage sensation Giulia Gwinn came to their rescue to put the icing on the cake. Other favourites include Sweden, Denmark, England and Japan.

There are plenty of feel-good stories. Jamaica have won the hearts of the world by qualifying for the first time ever (bizarre did you know: if it weren’t for Bob Marley and his family there wouldn’t be a Jamaican WNT). South Africa have also captured the minds of the world after videos emerged of them dancing before their first ever game at a Women’s World Cup.

If you are looking for players to keep an eye on, anytime a commentator mentions one that either plays for Olympique Lyon or is being scouted by OL should give a clue. But my personal favourites are, in no particular order: Tobin Heath and Mallory Pugh of the USA; Germany’s Giulia Gwinn and Dzsenifer Marozsán; Lieke Martens, Danielle van de Donk and Shanice van de Sanden from the Netherlands; Nigeria’s Asisat Oshoala; France’s Amandine Henry, Delphine Cascarino and Wendy Renard; Australia’s Sam Kerr; Brazil’s seventh World Cup trier Formiga, Marta and Cristiane. Trust me, there are so many talented players in the 24 teams, no doubt you’ll find yourself rooting for somebody completely random.

The World Cup is full of surprises, shocks, horrors, storylines and absolutely everything in between. While Roland Garros captured French attention up until now, the Women’s World Cup is a fantastic opportunity to inspire girls and boys and showcase the stars of today and the stars of the future.

I love the Women’s World Cup. I love that the cameras seek out female fans in the stands to showcase their passion, the cute and weird over-the-top costumes, rather than to creepily objectify them. I love seeing women referees, because, you know, women do know how to officiate. I love hearing women commentate and analyse, even if Jamie Vardy’s wife hates that an all-female panel can give superb analysis.

I love that the very gendered language of football that we are so accustomed to has to be re-examined - “who got man of the . . . I mean who got player . . . who won Laoch na hImreatha?” I love that this tournament gives women a voice and a place at the table in this extremely male-dominated, exasperatingly sexist football world.

And guess what? For a tournament that has only been officially recognised by Fifa since the 1990s, the football has been absolutely riveting.