TV View: Ireland fans united for once in scathing response to scoreless bore 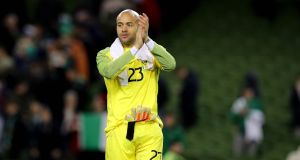 The timing of the match couldn’t have been better, on such a slow news week we’d have had nothing else to be talking about.

And while our mid-November friendlies tend not to bring the nation to a standstill, with the visitors this time around travelling down through the soft border from Norn Iron that was more than plenty to be piquing our interest.

Mind you, our Sky presenter Graham Little didn’t exactly encourage neutrals to stay with him rather than switch over to the England v USA scrimmage at Wembley, needlessly informing them that the Republic of Ireland had only one win in their last nine matches and Norn Iron had failed to scored in seven of their last ten.

That was as good as predicting we were in for a 0-0. If Graham ever opts for a career switch he should avoid sales.

Neil Lennon intervened to try and save the day, pointing out that NI had hit the post three times against Bosnia and Herzegovina last month, so while they hadn’t actually scored they had come mighty close, and Jonathan Walters pointed out that if you discounted Darren Randolph and Glenn Whelan then RoI were a team of babies brimming with potential.

And Neil promised it would be “feisty” too, although he was unliked by several thousand Celtic fans when he suggested it would be “more like a British game”. Which was entirely true, but you know what they say: words matter.

Time for Guy Havard to have a chat with Martin O’Neill. He’d been at a Co-operation Ireland do with Michael O’Neill, he told Guy, and he hoped the footballing occasion would “continue in that vein”.

If the Aviva had a roof it would have ended up in Magherafelt from all the puff produced by the booing that greeted the Queen-saving tune. If Jacob Rees-Mogg was watching, as you can be sure he was, he’d have been appalled, his border possibly hardening all the while.

But, just for balance, James McClean’s mere presence in the vicinity prompted the visitors in the stands to blow a whole pile of hot air themselves, so that was 1-1. It wasn’t quite Windsor Park 1993, but you’d be struggling to feel the love.

Our commentator Rob Hawthorne lamented the boo fest, noting that it took place “at a time when the island of Ireland is something of a political hotspot”, when it hasn’t really been much else for the last thousand-ish years, to be honest.

Not a good start to the evening, then, and it didn’t get a whole better after that. The only bright spot for the home support, really, Darren Randolph’s net-minding and Robbie Brady’s returning left foot which created admirable consternation in the NI rear-guard from pieces of the set kind.

“His deliveries are direct debits,” Keith Andrews told us, “right on the money.” Rob, no more than ourselves, didn’t know how to reply to that.

“The big glamour friendly so far a little short of glamour,” said Graham, the fella nigh on needing a cattle prod to wake Neil and Jonathan from their slumber.

“Aye,” said Neil. And he was struggling to find the heart to add anything else.

Remember that seminal Rod Stewart tune? “I don’t want to …… talk about it.” At least it all finally bonded the opposing fans who had lost 90 minutes of their lives on Thursday evening, the two camps delivering a united Ireland response at the full-time whistle: “Booooooooo.”

Graham abandoned all efforts at bigging up the evening.

“Perhaps we know now why the last game between these sides was played behind closed doors,” he said. “It was pretty short on entertainment.”

And then he was tasked with encouraging Sky viewers to tune in to the teams’ next fixtures.

“If you’re a real glutton for punishment and you want to watch more of Northern Ireland and the Republic of Ireland, they’re in action again on Sunday and Monday, concluding their Nations League campaigns.”

That’d be like trying to flog double-glazing but admitting it’ll leak after a month. Admirably honest, but on the sales-technique front, a touch weak.

But it was a good night on the Co-operation Ireland front, north and south unified to leave us losing the will to ever watch a mid-November friendly again.

1 Cheltenham faces criticism after racegoers suffer Covid-19 symptoms
2 Sport will be last duck in the row in return to normality after coronavirus
3 Wilson Kipsang arrested for breaking coronavirus curfew with bar lock-in
4 Coronavirus crisis could cost the GAA up to €60 million
5 Cycling Ireland thrilled with take-up for Zwift League series
Real news has value SUBSCRIBE
Crossword Get access to over 6,000 interactive crosswords