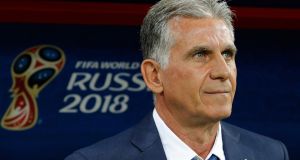 Carlos Queiroz before his side’s World Cup 2018 Group B match against Spain. Roy Keane reveals his trues feelings for the Iran’s coach. Photograph:EPA

Polished and pathetic scenes. Roy Keane being neither on the subject of Iran manager Carlos Queiroz’s second coming at Manchester United.

“For some reason towards the end of my time there I found him really disrespectful towards me so we had a bit of a falling out.”

Everyone stand clear. “. . . and I told him where to go. One of my big regrets is I probably should have ripped his head off but: excellent coach and he is doing an excellent job it has to be said.”

BBC have no hope of competing with ITV Gold. Not with Matthew Upson, a poor man’s Alan Hansen as player and pundit, sitting between Jermaine Jenas and Killer Kilbane.

At least Kilbane rewards lunchtime lingering with sensible joined-up sentences. Not before Upson cautiously pronounces Pepe as old, and thus “age slows you down”.

Morocco’s Nordin Amrabat is wearing a scrum cap. Miraculously slapped from head trauma by the team doctor five days previous, the protective gear, which does nothing of the sort, is discarded on 16 minutes.

Kilbane calls the clear and obvious, “In football we turn a blind eye to concussion. We have to learn from rugby.”

Amrabat has a stormer up and down the right flank.

En route to Montrose we stall at Off The Ball TV where Risteard Cooper has Keith Andrews and Joe Molloy in stitches. Darragh “the bus conductor” Maloney gets a wipe as Peter Collins gifts the mimic with unending material.

Risteard: “Yeah, they’ve given him a good shine.”

Risteard: “Maybe Darragh has to get on a bus and not come back for Peter to get the top job (morphing into full Peter Collins) here on RTÉ for the Russian World Cup which is taking place of course in Russia in 2018. Of course Euro 2016, which Ireland qualified for, was two years ago and that’s why this is called the World Cup and not the Euros.”

On RTÉ (for real) Maloney anchors a compact session with Richard Dunne and Michael O’Neill as Ronaldo empties the Atlas Lions.

Darragh: “Fifa clocked Ronaldo sprinting at 33km the other night . . . I can’t even ride a bike that fast.”

The number, 33 years old as well, can only fuel the Messiah complex, giving the Judas role to Pepe, betraying Our Lord and Saviour with weary, cheating limbs.

“Not something you were ever guilty of,” goes the polished Alex Scott.

“Men were men then, I suppose.”

“What would you do if I tapped you on the shoulder?”

Kilbane directs traffic on the latest non-VAR-decision after José Fonte bumps Khalid Boutaïb in the air.

“I sort of think it’s a penalty,” says Jenas sheepishly. “The lads may have a different opinion.”

Mark Chapman interjects, “He barged him in the back!”

Kilbane: “If we are arguing about it it shouldn’t be given. It has to be clear.”

Upson wanders into the adult conversation with his aerial football theory. When Chapman challenges the ridiculousness of his statement he tries joking to safety. Chapman doesn’t permit this.

Kilbane: “Your face is saying you do not agree with that, Mark.”

The English journeymen have a clean shine to them while Dunne does not look ready for big-time punditry. This makes him almost as compelling as Keane. One twitter experts says Dunne “sounds like he’s speaking in a room with a sleeping baby. Always somewhat hushed. It’s quite relaxing.”

Soothing words on Ronaldo bring shining clarity. “He’s the magic man in the whole thing. Without him it doesn’t work but he seems to have the rest of the team working for him and that’s why they can’t succeed, I think.”

“It’s like everyone has been brought to Russia to play the World Cup just for him . . . I don’t think he sees anything other than himself and everyone else around him are just little pawns playing his game.”

Killer: “Portugal are a dreadful watch. This hasn’t changed my mind.”

Epilogue. Collins oversees the shift change in Donnybrook – Sadlier, Kevin Doyle and Dunphy rotate in - with a lyrical ode to Luis Suarez.

“Cometh the man, cometh the hour or whichever way you’d like it.”

Doyle retired due to repeated concussion. Not a mention.