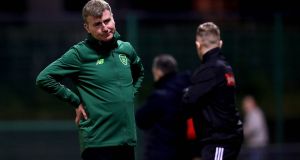 Stephen Kenny says he was happy with the performance of the locally-based under-21s he assembled for Wednesday night’s win over the Irish Amateur team in Whitehall, but suggested that it was early to predict how many of the players who featured might make the squad for the opening European Championship qualifier against Luxembourg on March 24th in Tallaght.

“The squad announcement is early March and the question is whether there will be one or two players from here or six or seven that are in the squad,” said the Dubliner after a game in which 18-year-old Brandon Kavanagh of Shamrock Rovers scored the only goal. “That’s all in the balance still, I have got a lot to get through.

“We were plotting today on the number of matches we’d have to go to over the next four weeks before we finalise it. I was at four matches in England last week and there are players in Europe as well. Connor Ronan has gone on loan to Dunajska Streda (in Slovakia), Simon Power has gone to Dordrecht (Netherlands), Stephen Mallon has gone on loan to the Central Coast Mariners in Australia ... I’m going to spend two weeks out there checking that one out,” he joked.

Irish Under-19 manager Tom Mohan has been in contact with Bayern Munich’s Ryan Johansson in recent weeks, he says, and Kenny went to see a Tottenham underage game himself so as to watch Troy Parrott, although the young striker only got on for a few minutes.

Both are still eligible for younger age groups, however, and Kenny says that he and the various other FAI underage team managers will sit down over the coming weeks to discuss where the various players might best be used in order to progress their development.

“There’s sort of unwritten code: if you can move them up, move them up – but if you think they’re going to be on the bench, then let them play. I respect that. By and large, that’s a good code.”

The 47-year-old is, he says, still settling into the job after a couple of months but seems generally happy with the options available to him.

“I was at Manchester United against Southampton last Friday night, the 23s, and Southampton had five in the team who were eligible for me: Jonathan Afolabi, Will Smallbone, Will Ferry, Aaron O’Driscoll and Thomas O’Connor. And that’s with Michael Obafemi injured, so six really. So we have quite a few now, yeah!”

He again expressed concern about the number of players going away in their mid-teens and then returning home having neither progressed as they would have hoped in football or education, and cited the group who came through at St Kevin’s Boys together a few years back, with Ross Treacy, Trevor Clarke, Darragh Leahy, Robbie McCourt, Danny Mandroiu all involved in Wednesday.

“They all went and were back by 19,” he said. “I can understand not making it, but actually being back by 19? That is quite stark, I think.

“And are they any more advanced than the players that didn’t go? No, they are not. And yet they were better in the first place. It’s not a criticism of anything, of a club, just an observation. It is just interesting.”

One of those who didn’t go, UCD’s Neil Farrugia, has, he said, had an approach from Malta about declaring for them (he also qualifies for France and Spain) but Kenny says is, like Michael O’Connor, the manager insists, keen to continue playing for the Republic of Ireland.

“I said to him, ‘I hope I shouldn’t be expecting a call from Didier Deschamps, ’” Kenny said with a smile. “But no, he’s committed, he wants to play for Ireland.”