England shouldn’t get too excited ahead of World Cup in Brazil, according to Hawking 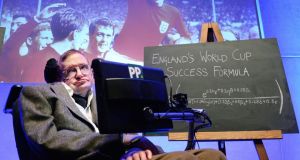 British theoratical physicist and cosmologist, professor Stephen Hawking speaks to the press during the unveiling of his scientific formula for how England can win the World Cup. Photograph: EPA

Professor Stephen Hawking today delved into the world of theoretical physics to come up with the answer to the question that has plagued generations of Englishmen: can England win the World Cup in Brazil. And the answer is . . . not really: most of the games are taking place at the wrong time - 3pm is best for the English; or they are taking place in locations that are too hot - anywhere 5 per cent warmer than their normal environments cuts their chances by 59 per cent, he reported today.

Though not a football fan, Hawking was asked by bookmaker, Paddy Power, to investigate to investigate the key factors which have affected England’s chances of World Cup glory, or disaster in the 45 games they have played in tournaments since 1966.

“(They) recognised that as a theoretical physicist I’m marginally more qualified to make predictions than Paul the Octupus (who accurately predicted the results in six Euro 2008 matches and seven in the 2010 World Cup),” Hawking told reporters in London this morning.

“So what are the optimal conditions for England success? Contrary to tabloid opinion, the presence of WAGs (wives and girlfriends),” says the professor of the women who dominated so much of the coverage during Euro 2008.

Roy Hodgson should play his men in red shirts: “Psychologists in Germany found red makes teams feel more confident and can lead them to being perceived as more aggressive and dominant,” he went on.

So often, England’s chances of glory have disappeared in penalty shoot-outs, says Hawking, who studied every single penalty taken by Englishmen since they were introduced in Argentina in 1978: “As we say in science, England ‘couldn’t hit a cow’s arse with a banjo’.”

Believing that he has found “the formula for the perfect penalty”, Hawkings urged his audience not to “tell the Germans”, saying : “Let’s start with the technique. Velocity is key. For this reason, get a run up of more than three steps.

“Give it some welly. There is only a 58 per cent probability of scoring if your run up is three steps or less. However, velocity is nothing without placement. If only I had whispered this in Chris Waddle’s ear before he sent the ball into orbit in 1990.

“Use the side foot rather than laces and you are 10 per cent more likely to score. The statistics confirm the obvious. Place the ball in the top left or right hand corner for the best chance of success. 84 per cent of penalties in those areas score.”

Strikers are better than midfielders and defenders. “But bald players and fair haired players are more likely to score. The reason for this is unclear. This will remain one of science’s great mysteries,” added Hawking.

Saying that the commission from the Irish bookmaker had been a fascinating project, the scientist has donated the fee he has received to Save The Children’s Syria appeal and to the Motor Neurone Disease Campaign.