Stage set for half of ‘dream team’ to fly solo

O’Neill to face press as Ireland boss for first time, without Keane 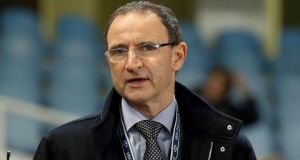 Mattin O’Neill: will be taking over the reins today as Republic of Ireland manager. Photo: Donall Farmer/Inpho

Barely a week ago the prospect of Martin O’Neill being unveiled as the new Ireland manager seemed an exciting one to many of the team’s supporters. Such has been the fuss about his choice of assistant, however, that the FAI has kept Roy Keane away from this afternoon’s press conference in Dublin in the hope of keeping everyone focused on the fact that the 61- year-old’s appointment is supposed to be the story.

The Derry man is bound to face a fair few questions about the former Manchester United star as things stand but at least now he won’t end up looking like a gatecrasher at his own party or be tempted into a plaintive cry of “I’m the gaffer”.

It remains to be seen if the former Celtic manager will arrive with a ready-made vision of how he intends to reshape the team he is inheriting or whether he says he needs some time to get a greater feel for its potential. He is charming and entertaining enough when he wants to be, however, to ensure that today goes well and even it doesn’t the broadcast people will be happy just to have someone in charge again who actually speaks their language.

“I spoke to Alan in with what was obviously an extremely difficult phone call to have to make,” the new manager said in a statement issued by the association last night.

“The simple situation is that I’ve worked with Séamus before at club level. I’m well aware of how highly thought of Alan Kelly is in Irish football circles (and) I told Alan that I will go and meet him after the upcoming international games to talk to him and tap into his experience.”

Kelly, an enormously likeable character, reacted with considerable dignity via twitter: “From Ire U18 in 1985 to the seniors at Aviva stadium in 2013. Great memories, Play-offs, World cups, Euro championships....The lot! Played with & against some great players &made some great friends along the way. That’s football! All the best to Martin, Roy & all the lads.”

O’Neill, Keane and McDonagh will apparently get by with what’s left of the Giovanni Trapattoni technical staff until after these games against Latvia and Poland are out of the way after which the manager will have plenty of time to recruit a coach or two.

The general public seem happy enough with the way things are shaping up with Pembroke Communications reporting very high approval ratings for this week’s appointments. More than 85 per cent of supporters are pleased to see the pair take charge, it seems, even if 47 per cent reckon it might not entirely smoothly between them and just short of 60 per cent suspect Keane and John Delaney will be excavating their respective hatchets at some point over the months ahead.

Keane’s relationship with the players may prove rather more important in terms of influencing the team’s fortunes over the next couple of years and on that front John O’Shea for one seems pretty positive about the prospect of working once again, not just with Keane but also his former boss at Sunderland.

The squad
“I know the types of people they are,” he said. “They are winners and motivational and it really is going to be exciting. Everybody should be looking forward to it; the supporters, the players in the squad and the media. I think you will see hopefully the football public in Ireland will really get behind it. I am sure we will see the reaction with the numbers for the Latvia game.

“It can only be good because of the type of personalities they are in terms of winning mentality, drive, hunger and motivation – all those things are needed for us to get going again...qualifying for tournaments again and giving a boost back to the fans as well.

“And Roy,” he concluded, “is arguably Ireland’s best ever player so having him in the dressing room for the younger lads and older lads to look up to and thinking that he is on our side wanting us to win. . . The standards he set were brilliant because he wants to win and that is what we need. I am looking forward to next week. I can’t wait.”