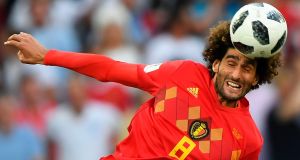 Contract negotiations were at an impasse throughout the 2017-18 season, with the divisive 30-year-old bound for an Old Trafford exit until a last-minute deal was reached.

United announced on Friday that Fellaini had signed a two-year deal with the option of a third, just a day before his United contract expired.

The deal is, to all intents and purposes, the one he was offered last year, with the club holding firm amid the player’s demands and interest from other clubs.

“I am pleased to be continuing my journey as a Manchester United player,” Fellaini wrote on Twitter. “I made this decision because I am very happy here.

“Also, I feel like this team, under Jose, still has a lot we want to achieve.

“I would like to say a special thank you to Jose for the faith he has always shown in me.

“My focus now is on the World Cup but I am looking forward to a successful season ahead.”

Fellaini joined United from Everton in 2013 and has scored 20 goals in 156 appearances, winning the FA Cup, League Cup and Europa League during his time at Old Trafford.

The 30-year-old started as Belgium beat England at the World Cup on Thursday, after which he reiterated that news about his future was imminent.

The contract is a boost for Mourinho, who has been desperate to keep Fellaini at Old Trafford.

The United boss defended Fellaini when jeered by his own supporters in December 2016 and has relied heavily on the Belgian during his two seasons in charge.

“I am very happy Marouane is staying with us,” Mourinho told the club’s official website.

“I always believed in his desire to stay with the club and I am delighted that he has signed a new contract.”