Shane Duffy: ‘Players have to adapt or they won’t be in the team’ 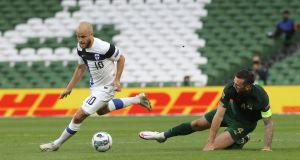 Given the late goal in Sofia and the move to Celtic Shane Duffy might have expecting to head into the next phase of his club career with fond memories of this particular international window. Then Finland happened and the 28-year-old had the demeanour of a man who had been asked to talk up going over the top in the morning as he addressed questions from a slimmed down press pack.

Duffy was clearly deeply disappointed about a defeat that he could only partially put down to his own and the collective lack of match fitness but the underlying problem seemed to be his ongoing effort to adapt to the team’s new style of play and the sense he is getting that some people out there simply don’t believe he can do it.

“I’m enjoying it, I like the way we are playing,” said the Derryman while sounding like someone who could have not be enjoying anything at that particular moment.

“When you are defending big spaces you get tired but we’ve got a new style and we’re controlling games a lot better than we did in the past. Players have to adapt or they won’t be in the team.

“Obviously, we are trying to get the ball higher up the pitch and then trying to go and press. We did that and got chances from it quite a few times tonight. We just have to keep working on it and the communication. Obviously, we didn’t get the results that we wanted and there is a lot of room for improvement.

“It’s not been the week we wanted,” he continued, “it was a disappointing week overall, just the one point but this team has bounced back from a lot of things before.”

The Irish defence was exposed again on more than one occasion with the Finns playing through them. Duffy might have come out of it well again had he scored another header late on, which he very nearly did, and his threat around the opposition area pretty much guarantees his presence. But the feeling persists that he is far from perfectly suited to the new style.

“I just try to go out there and play my game but it’s a little bit different because the full backs are going to be a lot higher. So we were two v two a lot tonight with the Finnish strikers. People can say what they want about me but I back myself. I’ve done it in the Premier League and at international level but in the position I’m in I’ve got to deal with big spaces and get on the ball and obviously I am trying to get better at that.

“I’ve just got to go away now, try to get fit and play as many games as I can.”