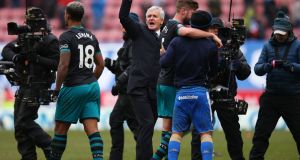 The FA Cup semi-finals will be an all-Premier League affair after all. Wigan Athletic did their best to keep the League One flag flying but, after eliminating three top-flight opponents in previous rounds, they met their match in Southampton, who were anonymous in the first half but managed two goals and a penalty miss in the second.

“In the first half especially we were excellent,” Wigan manager Paul Cook said. “We gave it our best but good luck to Southampton, they took their chances. We felt we were playing well but we probably didn’t manage to work their goalkeeper enough.”

Wigan were by far the most positive team in the first half, as a staggering corner count of 10-0 to the home side suggests. They also managed to match their Premier League opponents for passing and movement, with the consistently impressive Nathan Byrne putting in another excellent attacking display at right back, but did not manage to fashion as many clear-cut chances as their dominance warranted. The half-time conversations rightly centred on the theme that no one would have guessed two divisions separated the two sides, although that actually did Wigan scant justice. If anyone looked like a Premier League outfit then it was the home side.

The only worry at that point was that Wigan had not succeeded in taking the lead from any of the goalmouth situations they had created. It was not a case of profligate finishing – they just could not find the final pass to split open the Southampton defence. Chey Dunkley was close midway through the first half but could not quite turn the ball in after Byrne’s shot took a deflection, and when Michael Jacobs went on a solo run past most of the Southampton defence, he sent in a cross for Will Grigg on the stroke of the interval which the striker could not quite reach.

All Southampton had managed in the same period was a couple of hopeful shots from Sofiane Boufal and Mario Lemina that were nowhere near the target. The visitors emerged for the second half looking a little more determined, and should have gone in front just before the hour when a rare Byrne mistake led to the best chance of the game thus far. The full-back’s attempted square ball ran straight through to reach an unmarked Manolo Gabbiadini by the penalty spot. The Italian should have scored but he too appeared to be taken by surprise, and a less than decisive finish allowed Christian Walton to come out and close him down.

The Wigan goalkeeper also saved when Pierre-Emile Hojbjerg headed powerfully towards goal from a Southampton corner, though when Dusan Tadic sent over another just a minute later, the same player made the breakthrough with his first goal in English football. Perhaps Wigan were expecting a header, for when the Danish midfielder met the corner with a first-time shot neither Dan Burn nor Walton on the line could keep it out. Southampton had won three corners to Wigan’s 11 at that point, though crucially they were at least able to make one count.

Cook was not going to give up on his Wembley dream without a fight, and the Wigan manager’s response to going behind was to send on two forwards in Ryan Colclough and Nick Powell, even though the latter was barely over a hamstring injury. It appeared Wigan might be punished for their presumption when Burn brought Gabbiadini down in the area to concede a penalty, but though the striker took the spot kick himself and struck his effort firmly, Walton guessed correctly and sprang to his left to make a wonderful save.

That at least allowed Wigan to keep hoping and trying for the last 20 minutes, but Southampton brought their experience to bear to close the game out. Substitute Noel Hunt was unable to accept a difficult opportunity as the match moved into stoppage time, before Wigan’s remarkable run was finally and firmly brought to an end by Cédric Soares. The full-back came up with an inspired headed touch to take out Callum Elder from Nathan Redmond’s pass, and once in the area found it easy to sidefoot past Walton for another debut goal. Two new scorers took Southampton to Wembley.

“It’s difficult to say it’s a new start because it is the middle of the season,” Hojbjerg said. “But we have a new manager and we are at Wembley, so it feels like things are looking up.”