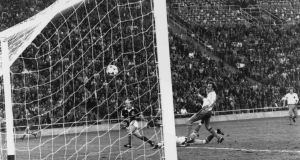 Scotland’s Archie Gemmill scores against the Netherlands in 1978. Coming in a 3-2 win for the Scots, it was one of the most memorable goals in World Cup history. Photograph: Hulton Archive/Getty Images)

The Scots were once so proud as to be picky about the way in which they qualified for major championships, a fact that makes the last 16 years of staying at home all the more difficult to bear for fans with memories long enough to recall the 1950s.

Five years after the second World War, with money tight and intercontinental transport inconvenient, Fifa weren’t falling down with teams interested in travelling to Brazil for the return of their tournament, and qualifying in Scotland’s case required only a top-two finish in the old four-team Home Championship.

Four years later they finished second to England again, winning just one game this time, against Northern Ireland. They sent a small (just 13 players, two of whom were goalkeepers, neither of whom were much good), terribly underfunded squad to Switzerland where the proliferation of interfering officials and well-looked-after wives is said to have prompted the resignation of the manager one game in – leading to the sort of resentment among the players so ably articulated by our own Roy Keane during what some of us still fondly remember as his Saipan period.

The Scots qualified again in 1958 but it was to be a while before they really started to find their stride on the world stage (in terms of getting onto it, that is, for they have never flourished once there, not once making it past the group stages).

Between 1974 and ’98, they were at six of the seven tournaments, an era that towards its end also took in their two appearances at European Championships. At the time, it all looked pretty impressive from this side of the Irish Sea.

But 27 years and a day on from that Gary Mackay goal in Sofia, which propelled the Republic of Ireland to its first major championship, the Scots are struggling to get back to the game’s top table.

The decline of their domestic league has meant that there are effectively less top-quality players to choose from, while some unfortunate managerial appointments since France ’98 have probably contributed to the barren spell.

Sure, there were some good players in the squad assembled by Craig Brown – Jackie McNamara, Paul Lambert and John Collins amongst them – but overall there was nothing like the quality contained in Ally MacLeod’s ill-fated (given the relative scale of the expectations) travelling party of 1978.

That squad had been brimming with stand-out players from leading clubs – including Gordon McQueen, Kenny Dalglish, Joe Jordan, Lou Macari, Graeme Souness and Archie Gemmill – but Gemmill’s goal against the Dutch turned out to be the only moment to really savour.

A team thought by some to be capable of reaching the semi-finals crashed out, in line with custom, in the first round.

Back in 1954, the Scots had been the only nation to bring players to the World Cup from outside their domestic league – the small handful that did end up going to Switzerland might have been bigger had Rangers not refused permission for their players to take part.

After 1978, there was never again such a strong representation of really top-class English clubs in the Scotland squad and while Celtic’s representation was (and is) maintained there has been a gradual and downward shift overall to the point where just about half of the current squad, as it stood yesterday, is drawn from the Championship, with only Manchester United’s Darren Fletcher representing the most seriously moneyed outfits from England.

The Championship sucks everyone else south because the second best payers in the top flight that season paid just one seventh of that Celtic figure (relegated Rangers came in somewhere in between) and half of the SPL clubs paid their players less than £100,000 (€127,500) on average a year.

Still, it is actually the supposed good days that did much of the damage, according to the Guardian’s Scottish football correspondent, Ewan Murray: “There’s been a decline in the league generally,” he says, “and that’s certainly a factor over the last 16 years, but perhaps the bigger problem is actually that when there was some money there was a disastrous reliance on over-priced imported players, which stunted the development of a whole generation.”

Certainly, the team has generally not possessed the quality to beat serious rivals, while there have been too many slips against lesser nations, such as Lithuania, the Faroe Islands and Macedonia. Playing talent has not been the only issue, says Murray.

“But that’s why Friday is such a test,” he continues. “There have been so many false dawns; so many times when we’ve been saying that this is the team that’s going to make the breakthrough. We’re going through that same thing now again and, from that perspective, it’s a game we have to win; a real acid test.”

For them and us both then.

1 Gordon D’Arcy: Change has to happen before Ireland's trip to Paris
2 Zinedine Zidane tests perfect record against old friend Guardiola
3 Kevin Seaward: ‘The first time I wore the Vaporflys, I hated them’
4 Gerry Thornley: Wild reactions to this Ireland team as fickle as the wind
5 Out of Bounds: Patrick Reed helping make the ‘C’ word less taboo
Real news has value SUBSCRIBE
Crossword Get access to over 6,000 interactive crosswords