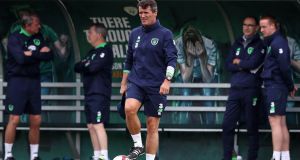 Ireland assistant coach Roy Keane at training in Abbotstown on Tuesday ahead of the World Cup qualifiers against Georgia and Serbia. Photo: Ryan Byrne/Inpho

Roy Keane has claimed former team-mate Ryan Giggs would be worth £2billion in today’s “mind-boggling” transfer market as clubs rake in massive fees for “average” players.

The Republic of Ireland assistant manager admitted his surprise at some of the figures which have been paid this summer, with Paris St Germain forking out a staggering £200million for Neymar and preparing to invest heavily once again in Monaco’s Kylian Mbappe.

However, it is the prices which have been paid for players lower down the food chain which have surprised Keane.

He said: “It’s mind-boggling, the figures that are out there — especially for the average players. If ever there was a time to be a professional player it’s now. Average players are going for £35million. My goodness.

“I don’t really analyse it too much, but that’s the market place at the moment. There aren’t many top players out there. The really big players are going for big money and it’s filtering down now.

“When average players are going for £30-40million, it does make you scratch your head. But if the clubs are prepared to pay that, then it’s not the players’ fault.”

Asked what Van Nistelrooy would cost now, he replied with a smile: “Ruud would certainly be worth in the market now probably a billion.”

Asked further how much he himself might cost nowadays, he answered: “£3.75million, I think.” That, of course, is the then British record fee Manchester United paid for Keane when signing him from Nottingham Forest.

Unusually, most members of the current Ireland squad are settled at their clubs and there is little prospect of late rushes to complete deals as Keane and manager Martin O’Neill prepare for Saturday’s World Cup qualifier in Georgia and the clash with Group D leaders Serbia which follows it in Dublin next Tuesday.

The management duo are contracted until the end of the campaign and although there have as yet been no talks over a further extension, Keane, who was recently linked with the Israel job, much to his own surprise, remains relaxed.

He said: “A lot depended on how results were going to pan out, but it’s been great. The journey has been fantastic.

“It’s gone pretty quickly. I’m still enjoying the job and I’m as hungry as ever to try to win football matches and bring success to Ireland. It’s been great and long may it continue.

“It’s great to be back in the working environment. We have all had a good break, but when football is in your blood, it’s in your blood and you look forward to these challenges.

“If we’re here for another three years, fantastic, but of course results will dictate that, no doubt.”

Keane still retains an ambition to manage in his own right once again, but insists he has imposed no time-frame on that.

He said: “I’ve got a lot of strengths, I would like to think, as a footballing person, but what I can’t do is see into the future — which might be a good thing.

“This idea of what might happen to me in the future is irrelevant. I have just answered a question earlier, ‘Are you enjoying the role here?’. I am very happy and the whole focus is on the game on Saturday.

“Whatever happens next week, next year, tomorrow, it doesn’t really matter.”

The trip to Tbilisi is a gruelling one, but Keane is convinced the players will arrive in top condition.

He said: “That’s part of the challenge of being a modern footballer. But we’re on a private plane, it’s not torture — not like it was years ago.”

Chelsea have a free hit from here but may not get a better shot at it 08:49
Liverpool eyeing another comeback; Outline plan for return of club rugby 07:35
Seán Moran: DRA saving the GAA a lot of money for 16 years 06:00
Sarah Lavin bidding to clear last hurdle on the way to her Olympic dream 06:00
Basketball’s loss is rugby’s gain as Lauren Delany makes up for lost time 06:00