For how long can Ireland’s 100 per cent record against Georgia last? 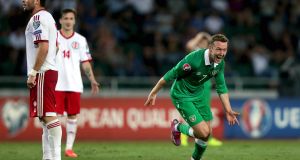 If Martin O’Neill is surprised that Georgia don’t get better results in competitive matches, imagine how Vladimir Weiss, his players and their long suffering fans feel. The country’s football team has endured a succession of false dawns since entering the qualifying stages of a major tournament for the first time in the early 90s and few teams have frustrated them quite like Ireland in the two and a half decades since.

On paper, the Irish are consistently stronger than their opponents this weekend but they have clearly pushed their luck once or twice in terms of how that translates onto the football pitch itself. At this stage, there is no other country that Ireland have played eight times and still maintained a 100 per cent record but it would require a little bit of nerve to lord it over the Georgians.

The list of games between the two sides includes one relocated to Germany because of a border dispute was – somewhere between cynically and shamelessly – exploited for Ireland’s advantage. It is also one in which a penalty so outrageous was awarded against the Georgians that it is routinely cited by neutrals in reply to Irish whinging about Thierry Henry’s handball as being inextricably linked to that night in Paris in terms of cosmic karma.

Neither should matter, you might think, given the general gulf between the sides but forgetting about the friendly game in Dublin – reportedly offered to Georgians as a sop for the injustice of moving that 2008 game to Mainz – the Irish has only won one of seven competitive games by more than a goal and by last year’s encounter in Dublin things had reached the stage where they were having the better of things both in terms of possession and attempts on goal.

That night, it took a rather remarkable Seámus Coleman goal to win the game for Ireland but a few of the Irish winners seem to stand out for one reason or another. There was the one scored by Gary Doherty – who also got one a couple of months later in the return game – in March 2003 and there was the last minute Aiden McGeady strike that earned Ireland two extra points in Tbilisi at the start of the last Euros campaign.

Robbie Keane got a few of his goals against Georgia too but he will be best remembered over there for that ropey penalty and the headed goal that followed not long after. Hector Cuper had thought his side were on the way to a win that night in Croke Park after they had taken the lead less than a minute in then somehow contrived to dig in and defy Ireland’s best efforts to break them down.

On every occasion, you would have to say Ireland deserved to start as favourites and yet there is still a sense that we are winging it in some sort of football version of that 80s arcade game Frogger and that it is only a matter of time before we get hit by an oncoming car.

What makes our record all the more remarkable in the meantime is Georgia’s success against teams who share what the wider world is so fond of describing as the “British style of football”. They have won three out of four games against the Welsh and Chris Coleman’s side were fortunate enough to get away with a point when the two sides last met, in Cardiff last October.

Then there was the win over Scotland in September 2015, one of their two in four games between the sides, and a result that decisively changed the shape of that European Championship qualifying group in Ireland’s favour.

Beyond that, there have been home draws down the years against the likes of Italy, Switzerland and Ukraine and a run of 10 games unbeaten around 2010 that ended early the following year with a 1-0 win over Croatia.

For all that, they have achieved nothing really, finishing in the bottom two of their qualifying group in each of their last eight campaigns. With the local club game struggling – having beaten the likes of Inter Milan, Napoli and Liverpool back in the 70s, Dinamo Tbilisi have made it through just one qualifying round of European football in the last four seasons – there has been a steady shift towards the national team being based on players in overseas leagues but most these days are at middle ranking clubs in nearby countries.

At the start of each campaign there is genuine optimism that this might be the one in which they finally assert themselves and there is substantial support for the side with 40,000 having attended the last Ireland game there. In the end, though, they always have to settle, it seems, for springing the odd surprise.

This time they have already managed one and O’Neill will be hoping that that has gotten it out of their system. But it was certainly no surprise to hear him saying he would take any sort of win out there this weekend. Like Scotland a couple of years back, his side needs to avoid a slip up but the Georgians might certainly be forgiven for feeling they are due a result against Ireland.

1 Gordon D'Arcy: I know what Joe and Cheika would do. Fix the basics
2 Darragh Ó Sé: Cork and Donegal went out with the wrong attitude
3 Simon Easterby admits Ireland may need to take new line on maul
4 Can Solskjaer’s Man United find their groove when it matters?
5 Dundalk’s Jordan Flores on the shortlist for Fifa Puskas award
Real news has value SUBSCRIBE
Crossword Get access to over 6,000 interactive crosswords